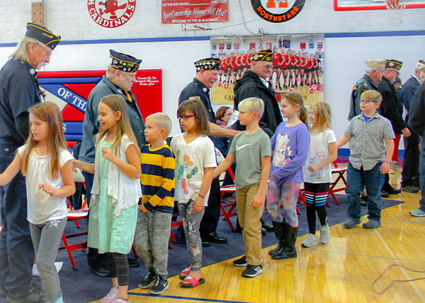 THIRD GRADERS at Wakefield-Marenisco K-12 School take a moment to thank a veteran during last Monday's Veterans Day program in the school gym. From left, the first three veterans, from Wakefield American Legion Post 11, are Commander Eddo Maki, Rudy Krznarich and Mike Salli, and the fourth veteran is Ricky Hand, who is a member of Wakefield VFW Post 9084. Further to the right are Greg Yon and quartermaster Brad Wakefield, also from the VFW. Kids, from left to right, are Kaelyn Anderson, Lillian Cooney, Steven Worthington, Lilliana LaMaide, Adam Everson, Maddy Ahonen, Annalise Rooni and Killian Spencer. Teri Giuliano, who is a Title I teacher at the school, took the photo.

WAKEFIELD - Veterans were honored guests and participants in a Veterans Day program last Monday at the Wakefield-Marenisco K-12 School in Wakefield.

The program, for which Richard Bolen was master of ceremonies, began with a karate tribute by Ruk Betlewski of Ironwood. It was called "A Salute to Soldiers."

Second- and third-grade students sang the national anthem, as well as "This Flag We Fly."