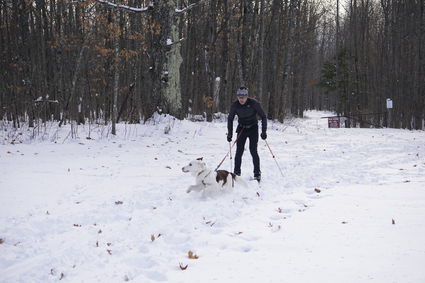 Robert Polic, Manitowish Waters, has a skijoring workout with his four-year-old border collie, Sprocket, on Saturday at Wolverine Nordic Ski Trails. The two are competition skijorers who wanted to attend the beginner class to meet more of the local community.

Ironwood Township - Organizers said a beginner skijoring class was to introduce more people to a winter silent sport that is gaining popularity as a way for people of various fitness levels to exercise and enjoy the outdoors with their dogs.

Skijoring is a sport involving being towed by a dog or a horse via harness while on skis.

Sandra Tocko offered the free dry-land clinic to around 15 people, most of them with dogs, at Wolverine Nordic Ski Trails. Tocko spent some time talking about dog personalities and needs, and some of the various ways to condition dogs to pull while still inside the house using a harness and treats.

"I think it was a really great turnout and I'm super excited to see all the energy," Tocko said. "Everyone's enthusiasm to try something new and to incorporate their dogs into their activities is awesome."

Colleen Wamhoff, Ironwood, said the class was amazing and skijoring is something she's wanted to try with Arya, her six-month-old Irish wolfhound cross. The class was a way to start out right with trainers who know skijoring and give good lessons, she said.

"I think she (Arya) is really going to enjoy it and it's definitely something that we'll be doing all winter," Wamhoff said.

Kim Kolesar, Ironwood, said this was her first experience with skijoring. She wanted to do something fun in winter with Ella, her four-year-old German shepherd, along with Ellas's eight-year-old mother, Shelby.

"I love it. I can't wait to do more," Kolesar said. "I've wanted to do this for a long time but I just didn't know the basics, especially with the equipment."

The dry land clinic was to fit the harness and lines and to give the people and their dogs a chance to learn how to walk and run together, she said. She taught commands to teach dogs when to pull, stop, go left or right, and suggestions on how to deal with various situations that can occur on the trail.

The class was a foundation so interested people can come back a little later this winter to incorporate the skiing, she said.

"The goal is just to get people and their dogs moving," Tocko said. "Dogs spend all day just waiting for us to come home."

Much of the time was spent discussing the gear. There are a variety of harness styles available and the choice may come down to the individual or dog size, physical condition or just preference, she said.

Brady Hahn brought Bo, his 10-year-old lab mix that was a H.O.P.E. Animal Shelter rescue dog. Hahn walked Bo through commands as Nannette Bell, Ironwood, put on skis and harnessed herself to the dog.

"I enjoyed the class," Hahn said. "They were great people and it was good for Bo to see some other dogs. It was pretty fun and we're fired up."

Cross country skiing is an activity for the slow or fast skier, she said. The dogs are the same with tiny dogs going for a brief, brisk walk without pulling the skier at all, to the outdoors dogs who want to run for miles and take some of the load, he said.

"It's dog-assisted skiing," she said. "It's for all skill levels and you just need to determine if want to go slow or to be a racer."

Skijor harnesses can also work with snowshoeing, walking, hiking, jogging, biking and rollerblading, she said. There are tandem and fan harnesses for multiple dogs, she said.

Serena Lohkamp, of Wakefield, said her family recently started snowshoeing on their property, and wanted to learn how to involve Tuck, their six-month-old blue chip bloodhound. She brought Tuck to the class along with her son, Lake, 11.

"I love being outside with my dog," she said.

Tuck likes to pull and she tries to break him of the habit on walks. The skijor class is a constructive way to learn a different activity where Tuck can pull.

"I need a harness for him that is different from our walking harness, so that he understands that it's OK to pull here (skijoring) and not OK to pull there (walking)," she said.

Two cross country skiers who also compete in skijoring events were present to attend the class. The two said they wanted to meet the instructors and others who are interested in skijoring.

Tim Fitz, of Mercer, brought Tera, a border collie he placed second with at the Barkie Birkie in Hayward, Wisconsin. He started skijoring with Tera's father around 20 years ago, he said.

People tend leave their dogs home, especially in winter, Fitz said. Skijor is a way you take the dog along as a partner who is always ready to go, he said.

For skijor, he said the 50-pound dog is the ideal size for pulling. They have lots of energy to run and they are strong enough to pull about 20% to 25% of the load, he said.

A smaller dog is more or less a companion and the larger dogs can pull but they cannot run fast, he said. For competition skijoring it's best to partner up with someone so the dogs get comfortable on the trail with other dogs, are well behaved and adjust to the rules for passing, he said.

Robert Polic, of Manitowish Waters, brought Sprocket, his border collie who is Tera's pup. The four-year-old Sprocket has been skijoring for three years and is already a podium dog, he said.

Skijoring, like cross country skiing, has its roots in old Scandinavian culture as a mode of transportation. The modern skijor is more about getting dogs outside with their owners in the winter, she said.

The surge of skijoring in the United States in more recent years has been propelled by the growing number of trails allowing or encouraging skijor and promotional events such as part of the Superbowl weekend festivities in Minneapolis earlier this year.

"It's a neat sport and its growing," she said.