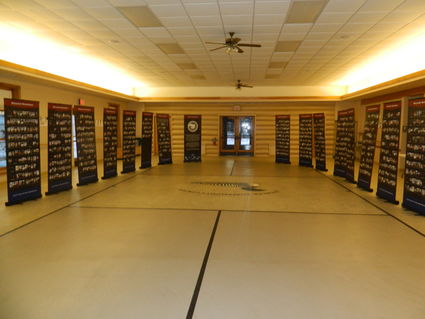 Wisconsin Remembers: A Face for Every Name exhibit stands at the Mercer Public Library Friday and consists of 17 panels with the faces and names of Wisconsin natives who lost their lives in the Vietnam war. There are over 1,161 names in the display. It took eight years for volunteers to gather and donate the photos. The exhibit will be at the library until Wednesday, Nov. 27.

Mercer - Wisconsin Remembers: A Face for Every Name traveling exhibit is a tribute to lost life and lost potential. It features the pictures of over 1,161 Vietnam War Veterans of Wisconsin and is on display at the Mercer Public Library through Wednesday Nov. 27.

It took eight years to gather the photos, according to Wisconsin Public Radio's website. Volunteers, including family and friends of those killed as well as teachers, students and others who just wanted to put a face to a name, donated the pictures.

Wisconsin Remembers is part of a bigger project to put a face to every name on the Vietnam Veterans Memorial Wall in Washington, D.C. When the project is finished, it will be part of a new Education Center that the Vietnam Veterans Memorial Fund is building on the National Mall called the "Wall of Faces." Wisconsin was the fifth state to find a photo for every resident listed on the wall, according to the website. 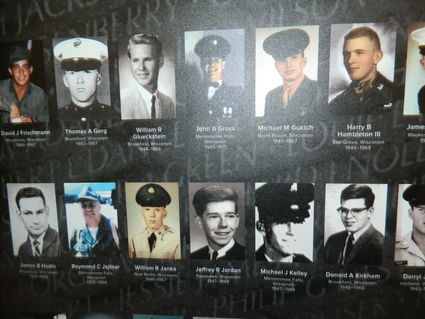 A closeup of one of the panels that is part of the Wisconsin Remembers: A Face For Every Name exhibit shows several local Wisconsin men who lost their lives during the Vietnam War. "We remember these men as sons, brothers, husbands, fathers, friends and neighbors," reads one of the panels. "We than them for their service. We honor their families for their sacrifice and we ask, 'What would they have accomplished if they had come home?'" The Mercer Public Library is hosting the exhibit until Wednesday, Nov. 27.

One of the 17 portable indoor display panels reads: "We remember these men as sons, brothers, husbands, fathers, friends and neighbors. We thank them for their service. We honor their families for their sacrifice. And we ask, 'What would they have accomplished if they had come home?'"

Library director Teresa Schmidt said it was nice to have the exhibit at the library. "Several come in and say their families are represented there," she said.

A Vietnam war veterans memorial park in Neillsville, Wis. called The Highground actually lists 1,244 veteran Wisconsonites, although the official U.S. Department of Defense and Vietnam Veterans Memorial Fundrecord lists 1,161. Photos of those listed at The Highground are also included in the Wisconsin Remembers exhibit.

Officials are working with both lists to "try and provide the most inclusive and documented recognition" that they can.

The exhibit is available to local libraries, historic societies, schools and community spaces throughout the state. There is no cost to have the exhibit, but host organizations are expected to cover the cost of shipping. For more information on hosting, contact Gregory Krueger, Curator of Events at the Wisconsin Veterans Museum at 608-261-0541.