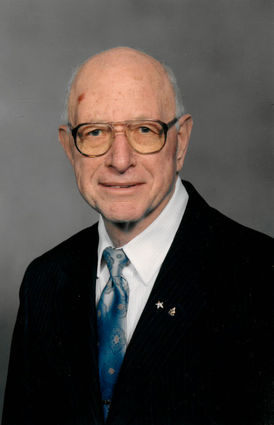 WAKEFIELD, Mich. - Thomas Mitchell, 97, of Ironwood, passed away at Gogebic Medical Care Facility on Nov. 22, 2019, after a brief illness. He was born on Nov. 23, 1921, in Ironwood, the eldest son of Thomas and Josephine (Peckstein) Mitchell. He attended Ironwood schools and graduated from Luther L. Wright High School in 1939.

Tom was employed by the Civilian Conversation Corps (CCC) Camp Norrie for four years. He then enlisted in the U.S. Army and served in World War II with Gen. George Patton's 3rd Army. He was honorably discharged in 1946. After returning to Michigan from the Army, he worked at Ahonen Lumber Company, Culligan, Twin City Wholesale, Meyer Sausage Company, Ironwood Bottle Gas, and finally, Lake Superior District Power Company where he worked for 20 years until retiring in 1986.

He is preceded in death by his parents, Thomas and Josephine Mitchell; his wife, Bette; his brother-in-law, Clarence Reinholtz; and a niece, Susan Dyer.

A memorial service will be held at McKevitt-Patrick Funeral Home on Wednesday, Nov. 27, at 2 p.m. with Pastor Keith Mullikin officiating. Full military rites will follow by the American Legion Post 5 Honor Guard. A Masonic service will begin at 1:30 p.m. There will be a reception for friends and family at the funeral home following the services.