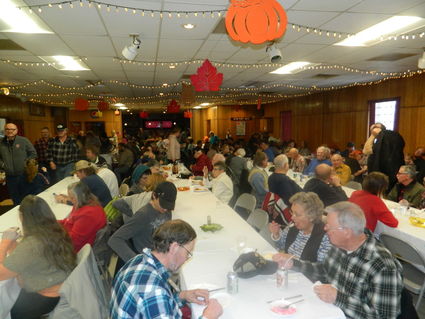 THE BESSEMER VFW Post 3673 fills the house Thursday afternoon with a free Thanksgiving meal served to whoever was interested in coming out on this mild winter day.

Bessemer - Over 200 people were served a free Thanksgiving dinner Thursday at the Bessemer VFW Post 3673 in Bessemer. This is the third year the event has taken place, according to organizer Donna Frello. This year, they took 229 reservations, but there was plenty for seconds and even for containers to go.

"There were only three chairs left in the whole room," said Frello. "We turned down whole parties at the last minute. There's only so many we can fit in here," she said.

Guests were served a full course turkey and ham dinner complete with all the trimming of a typical Thanksgiving meal.

"We came last year and the food was so good, we came again this year, said guest Francis Backman. Gary Backman Jr. echoed her statement. "It's wonderful" he said.

"It takes a lot of volunteers," Frello said of pulling off the event successfully.

One volunteer was going around clearing tables. "I love it," said volunteer Valerie Swanberg of Ironwood. "It's my way of telling everybody that does all this stuff, 'Thank you,'" she said. Her daughter helped at the dinner with her.

About 240 pound of turkey and ham were consumed, said Frello, along with 35 pounds of corn, 100 pounds of mashed potatoes, 45 pounds of sweet potatoes, 35 various pies and so on. Everything looked as though it were cooked to perfection. "The majority of it was all homemade," she said.

"This year was a blessing," Frello said of the volunteers. "Some unexpected ones showed up today." Yesterday there were only six people in the kitchen due to the winter storm which left over a foot and a half of snow in the driveway, according to John Frello.

"We are blessed we get donations that cover the dinner," Frello said. "We don't solicit them."

John and Donna Frello started the tradition three years ago. "We realized how much it was needed and accepted," she said. "Some people that come are by themselves. Some wouldn't have a Thanksgiving if it weren't for us, and some simply come for the cooking, she said.

"We do it for the camaraderie," said Frello. It's what this holiday is all about – getting everyone together. It's such a diverse group of people. It's fun," she said.

"I'm very thankful that we have the VFW to host the event," said volunteer Shatha Beauchamp of Bessemer. "We have now become one big family together."

Of the food she said, "We buy high quality ingredients because the community deserves the best."

Reverend Dominic Agyapong of the St. Sebastian Roman Catholic Diocese of Marquette church in Bessemer was on hand at the beginning of the meal for a prayer. "A lot of people helped organize this," he said. "God bless them. God bless the community. And God bless America," he said. Agyapong is from Ghana but has lived in the Upper Peninsula for four years and says he enjoys the snow.

Two veterans, members of the post, were finishing their Thanksgiving meal. "It was great food," said Jim Matonich. "It's a great cause and a great place," said Richard McDermott.