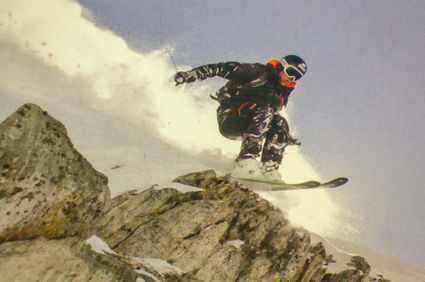 THIS STILL shot from the Warren Miller film "Timeless" shows the kind of action seen by people who watched the movie at the Historic Ironwood Theatre on Saturday evening.

Before the film even began, shrieks, howls and giggles filled the room and the balcony as emcee Mark Silver announced winners of prizes funded by sponsors. Volunteers then tossed the prizes across the theatre to gleeful recipients.

A short trivia game then ensued, with questions about area skiing facilities.

The film itself was an exercise in awe, portraying world-class skiers and snowboarders on some of the most challenging locations in the world.

Sky-high vertical drops, skinny canyons, and rocky cliffs were among the sites located in Switzerland, Austria, France and British Columbia, along with the two U.S. states of Colorado and Wyoming.

Sometimes, the trek up a featured mountain looked as treacherous as the fly down.

Narrated by Jonny Mosely, who was the first Puerto Rican named to the U.S. Ski Team, the film included a number of famous faces such as the zany Glen Plake of the U.S. National Ski Hall of Fame.

As comic relief, the film also included video of people learning how to ski and crashing in a variety of embarrassing ways, sometimes in piles.

Among persons at the theatre were proprietors of local skiing establishments, as well as many people who had spent the day skiing or snowboarding on local slopes.

Warren Miller, who died in 2018 at the age of 93, produced his first film, called "Deep and Light," in 1950. As the founder of Warren Miller Entertainment, he created hundreds of films on sports, as well as books and articles.

Funds raised from the local film showing will go to the Snow Country Ski Club, which is an Ironwood High School team.

The film is being shown throughout the world, with reviewers reporting some attendees showing up in full skiing gear. HIT board member Dan Tregembo said the movie is regarded as an unofficial kick-off to each year's ski season.