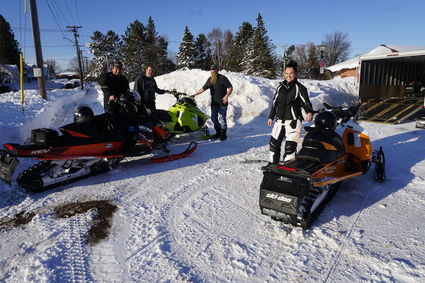 A group of snowmobilers from Wautoma and Amherst, Wisconsin, prepare to load their machines next to the Historic Ironwood Depot following a Monday morning on Ironwood area trails. From left, Ed Klinger, Mike Klieforth, John Krueger and Katie Krueger.

Ironwood - The second storm of the week brought about 20.1 inches of new snow to the west and northwest of Ironwood over the weekend, said Taylor Prislovsky, a meteorologist with the National Weather Service office in Marquette. The highest total for the Upper Peninsula was 28.2 inches about three miles east of Rapid River in Delta County, he said.

The Climate Prediction Center of the National Oceanic and Atmospheric Administration's National Weather Service, has an equal chance for below average, average and above average temperatures for the U.P. this winter, he said. It is too early to tell what kind of winter the U.P. will have but the storms are consistent with the prediction for above average precipitation, he said.

"So far it does seem to be hitting the pattern," Prislovsky said.

There is a 40% chance of snow showers this evening through Wednesday with a minor regional system moving through, according to the weather service.

"This seems to me to be a weak synoptic system but it's too far out ... snowfall amount easily changes this far out," Prislovsky said.

The weather should remain partly cloudy with temperatures in the teens and twenties through Saturday when there is another chance of snow showers. It is expected to be cloudy through Sunday.

The Gogebic-Iron County Airport was shut down at one point in the storm, "The storms last week caused lots of problems for the airport and the airlines," said Michael Harma, airport manager. "The wet snow and freezing drizzle led to icy conditions, and numerous flights were canceled due to the inclement weather.

"We still had issues at Ironwood on Monday," Storz said. "The airport was open but conditions were still unsafe to try and operate in ice and wind."

The airline does its best to accommodate passengers affected by cancellations, he said. There are refunds or rescheduled flight accommodations.

"A few drove to Rhinelander to catch a flight from there," he said. "We do our best but it's hard to find alternative transportation in blizzard conditions."

Weather related closings have not been unusual for Ironwood but these are the most cancellations and closings for November and early December since the airline's first year here in 2014 when 280 inches fell that year as opposed to the average 166 inches, he said.

The Michigan State Police Wakefield Post said there were no serious calls and officially only responded to one report of a car and deer collision on Nov. 26, and a car in a ditch on Nov. 27 on U.S. 28 and Johnson Road just outside of Wakefield.

The MSP said there were likely many more cars in the ditch but the MSP was not called for assistance. Most of the stuck drivers were helped by other motorists or tow trucks.

The Gogebic County Sheriff's Department said they responded to two semi truck incidents related to snow conditions. The first was Wednesday when a semi jackknifed on U.S. 2 near the Gogebic County Fairgrounds, and the second was a semi truck became stuck in the middle of M-28 in Wakefield Township.

Cheryl Strand, the administrative assistant at the Iron County Sheriff's Department, said she hadn't gone through all the weekend reports yet, but that she was aware of a semi truck jackknifing on U.S. 2 in Saxon. There were several cars in the ditch and some downed power lines, she said.

Ironwood City Manager Scott Erickson said the city plows did a good job anticipating the tail end of the snow in both storms to be able to get out there and plow without so much snow falling after the plowing.

"We have the equipment and we have the personnel who have dealt with this for many years," Erickson said. "There are always challenges with big snow events but our DPW folks responded for almost two days in row keeping up with it over the holiday."

The cleanup crews will be out starting Tuesday night at midnight to cleanup the major roads and remove snow to reduce the snowbanks, he said. The work will continue on Wednesday night and Thursday night until it's done, he said.

"The guys are out there when everyone is sleeping so there is less traffic that way," Erickson said.

"We try to remind people to stay far behind the snow plows because we have had concerning situations and the drivers can't see cars coming up behind them."

A group of snowmobilers who wanted to be among the first to ride the fresh snow around Ironwood on Monday came all the way from Wautoma and Amherst, Wisconsin. The group said it was great to be riding as early as Dec. 2.

Mike Klieforth, one of the group, said the snow provided an excellent base. The ride was still cut short, however, as he said there were mud spots to contend with that could risk damage to the trail, he said.