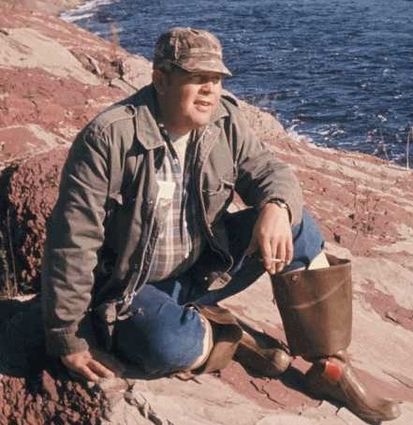 Gene was born in High Bridge, on July 12, 1933 the only child of Jacob and Hannah (Nortunen) Juoni. He was raised on his parent’s farm in High Bridge and spent nearly all his life there. On July 27, 1957 he was joined in marriage to Dale G. Beauregard, also of High Bridge.

He worked for a few years in road construction as a truck driver until he was hired by the White Pine Copper Company of White Pine, Mich. At White Pine, he worked underground as an equipment (tram) operator for 35 years, commuting 82 miles one-way daily, until he retired in 1995 due to heart issues.

Following recovery from heart surgery, he went back to work part time at Bitter Creek Candle Supply in Sanborn, and then at Walmart in Ashland.

He was best known as a meticulous assembler of grills, bikes and the all-around general fix-it guy. He was also given the occasional task as Walmart greeter and being the charismatic and outgoing man he was, “greeting” was his most favorite job.

He was an avid Suomalainen. He enjoyed his sauna and his Viili (Finnish) or filbunke (Swedish). He enjoyed many things; including war movies, hunting and was especially passionate about fishing. And even though he probably wouldn’t admit it, he loved to tell stories. He always had a story with every detail in perfect order. And for those that knew him well, you might even hear a story you had heard before but you still listened because he always spun it like it was the first time you heard it.

Although he never finished high school, he was an educated man. He was self-educated. If he didn’t understand or know how to accomplish something he would read, ask others, or watch a VHS tape (yes before YouTube). There was nothing we didn’t think our father could not do.

He was not an overtly open, emotional man. Compliments and praise for accomplishments from dad were rare but if you received one it was a treasure because it was truly genuine and heartfelt. He loved his family and worried about their well-being constantly.

He was a lifelong Christian Lutheran, knew his Lord and savior, Jesus and his Lord and savior knows him. A gathering of family and friends with a celebration of life for Gene will take place on Saturday, Dec. 7, at 11 a.m. at St. Paul Evangelical Lutheran Church, in Marengo. Visitation will be from 10–11 a.m. and a luncheon will follow after the service.

“Oh, how blest are they whose toils are ended. Who through death have unto God ascended! They have arisen from the cares which keep us still in prison … Christ has wiped away their tears forever; They have that for which we still endeavor … Come, O Christ, and loose the chains that bind us … With You, the Anointed, finds the soul its joy and rested appointed.” (LSB 679)

In lieu of flowers, memorials are preferred to the Saint Paul Evangelical Lutheran Church of Marengo.

Funeral arrangements have been entrusted to the Mountain Funeral Home and Cremation Services of Ashland and Mellen, Wis.