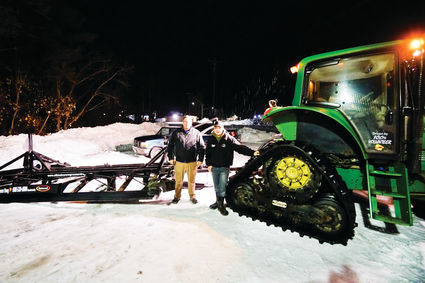 Mercer Area Sno-Goers members Tom Ziegler, left, vice president, and Tanner Hiller, public relations, with one of the snowmobile club's four tractors set up to pull a trail groomer on Thursday night. The club announced Thursday the 10 trails they maintain are open and about 50% rideable.

MERCER, Wis. - Around half of the 255 miles of funded snowmobile trails in the Mercer area are now open, according to the nonprofit group that maintains them.

"There is probably more than 50% of trails open right now," Ziegler said. "We can't have any trails going across the (Turtle Flambeau) flowage or any o...