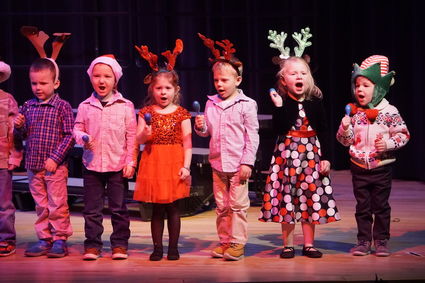 HURLEY, Wis. - The Hurley K-12 School auditorium was packed with parents and grandparents of kindergarten through fourth-grade students Wednesday for the annual Christmas concert.

The kindergarten through second-grade performed first, with each grade singing a few holiday songs along with some cheerful dancing, jumping and festive props. The third and fourth-grade students followed an intermission with another round of songs and then all the upper grades returned to the stage to sing, "Holly Jolly Christmas."

"The kid are cute, very festive," said JoAnn Eilken, a grandparent of a third-grader in the program. "It's all good."

Steve Lombardo, the pre-kindergarten to fifth grade principal and athletic director, said the concert fits right into the holiday season. He credited Jesika Cane, band director and music teacher, and Lydia Mattson, choral teacher, who teach the elementary music classes with putting the program together.

"We have a wonderful turnout here of parents and grandparents and community members," Lombardo said. "So, it's just a nice kickoff for the holiday season."

"We only see each class twice a week and so if there is a snow day or a vacation day we miss some of those rehearsals," Cane said. "So, it's not as much time as it sounds like but it works out perfectly and I think it's a good prep time."

"They don't get too burnt out and the music stays fresh," Mattson said.

The fourth-grade students all played the recorder during one song. The students start learning the recorder from the third week of school and so it works to incorporate it into the holiday program, Cane said.

Cas Bordner, a sophomore who is in the band, choir and a member of the Silver Express, played guitar for some of the student songs. She said her participation just sort of happened one night when she was at the school for Silver Express.

"I walked into Miss Cane's room and she was trying to figure out some chords on the guitar," Bordner said. "I played them for her and here I am."

The prekindergarten students performed "The Reindeer Pokey," "We Wish You A Merry Christmas," and "Jingle Bells."

The kindergartners performed "Rudolph the Red Nosed Reindeer," "What's In that Stocking?" and

"He'll Be Coming Down the Chimney."

The first-graders performed "Time to Decorate," "Snowman, Where'd You Go?" and "Up On the Housetop."

The second-graders performed "Rocking Around the Christmas Tree," "Snow," and "Santa Claus is Coming to Town."