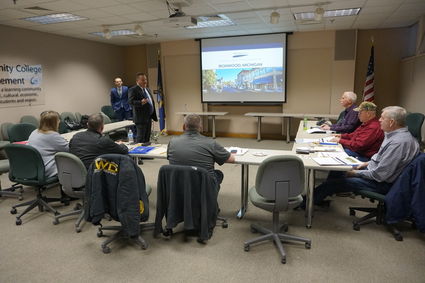 Air Choice One president and CEO Shane Storz, standing, outlines a proposal to renew the company's contract to provide Essential Air Service for the Gogebic-Iron County Airport to the airport board on Wednesday at Gogebic Community College. Air Choice One, which has provided EAS to the airport since 2014, was one of four companies presenting to the board Wednesday. Taylor Wood, marketing specialist for Air Choice One is standing at left. Those listening to Storz include, clockwise from right, board members Joe Bonovetz, Patrick Hanson, Tom Laabs and Brandon Snyder, airport manager Michael Harma, and airport secretary Kristi Freeman.

IRONWOOD - Officials from four commercial air service companies were in Ironwood Wednesday to compete for the next two-year contract serving Gogebic-Iron County Airport.

The air services that outlined EAS service proposals at the four-hour special meeting of the Gogebic-Iron County Airport board at Gogebic Community...