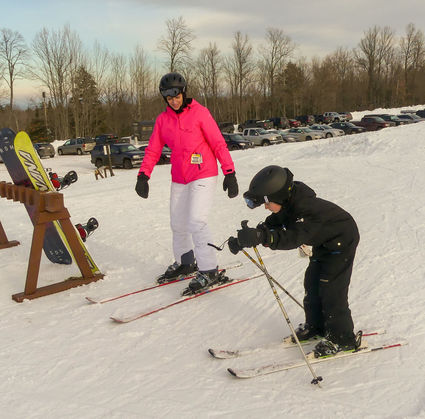 P.J. Glisson/Daily Globe AMONG MANY folks kicking in a new season at the Porcupine Mountains Ski Area in Ontonagon last Saturday are Kristi Pestka of Ontonagon and her grandson, Mason Pestka, shown here while gliding down the bottom of the hill. "It was wonderful," said Kristi. "It doesn't get much better." Mason said Agate Hill is his favorite run.

ONTONAGON - A new season kicked off last Friday at the Porcupine Mountains Ski Area in Ontonagon, and skiers and snowboarders were more than ready.

"So happy to have the hill open," said Sherrie McCabe of Ontonagon, who added on Saturday that she hits the slopes "every chance I get."

McCabe's friend, Winnie Huron of Ontonagon, said she was on the hill all day Friday and then returned for more fun the next day.

"It's lovely, especially in the gladed runs in the woods," she said. "There's just a ton of snow."

Huron, who has been a season pass-holder for years, said she and others helped a fir...