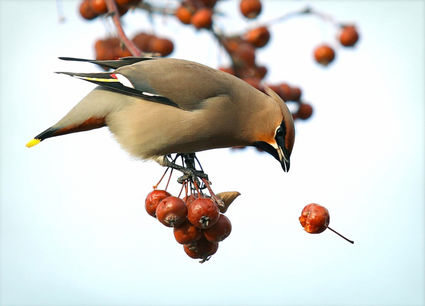 A Bohemian waxwing was won of the pleasant surprises of Saturday's 22nd annual Christmas Bird Count according to organizers Jerry and Christy Edde.

Special to the Globe

The tiny birds were perched on a limb hanging over Planter Creek Road and I could see the distinct dark "cheek patch" on the females. I wrote PUFI (purple finch) on my scratch pad, when suddenly, they all flew down on the road for some unknown "treat."

Sure enough I could then see the deep purplish-red on the breast of the males thus confirming my identification.

This was our 22nd Christmas Bird Count on Saturday and it was the first day of winter. It certainly looked like it, with the snow piled high all around us.

Purple finches usually migrate south of their breeding grounds in Canada, but this year it had been predicted that most would remain in the North because large seed crops of black ash were available in the provinces. This was true for all "irruptive species" such as pine and evening grosbeaks, red cross-bills, bohemian waxwings, common redpolls, and pine siskins.

Indeed, none of these species had shown up at my feeders or any of the feeders of my small cadre of Christmas bird counters.

In addition to the "irruptive" birds that migrate long distances when food sources become low in winter, there is another group, the short-distance (sometimes called partial) migrants, who routinely move south a short distance when local food supplies dwindle. This group includes the American goldfinch who were surprisingly absent this year from my winter feeders and the feeders of others. I believe this group simply are escaping the very early heavy snows we are experiencing, and possibly the empty feeders they are finding because folks cannot reach them through the deep snow.

I must admit that during the very cold period just prior to the snow this year I did not put out my feeders soon enough to attract these species, and when the snows hit many birds had already retreated south. At any rate, like Collin Raye, "Ain't no witnesses and I can't prove it - but that's my story and I'm stickin' to it."

Further down the road near the Bessemer sewage plant a young wild turkey ran across the road. I noted that this bird was exceptionally skinny and it immediately floundered in the deep snow at the edge of the road, and in desperation tried to fly up the hill at a very low altitude, but almost immediately hooked a maple sapling and crashed into the snow. I thought, poor bird, he is going to have a tough winter.

Unlike ruffed grouse who frequently dive into the snow for a warm nights sleep, or protection from predators, turkeys roost in trees exposed to the elements and to great horned owls among the leafless branches. Ruffed grouse are built for the Northwoods - turkeys, not so much.

However, further down the road we came across a large flock of turkeys strolling down the road and then into the yard of a very generous fellow who keeps them well fed. Each of these turkeys were fat with sleek shiny feathers.

The vast majority of our birds, such as vireos, warblers, thrushes, wrens, etc., are long-distance migrants who travel south of our border every year regardless of local food supplies. So this winter, that pretty much leaves us with ruffed grouse that eat aspen buds; creepers, nuthatches and woodpeckers (who eat insects they clean off of trees); shrikes (that eat other birds); a small number of raptors that eat small mammals (owls and some hawks); and chickadees that eat almost anything. It should be noted that high energy suet is probably the most popular item at bird feeders this year.

I would like to thank my friend, and former Bessemer mayor, Joe Bonovetz, who reported a small flock of Bohemian waxwings which were devouring his crab apple tree fruit. Apparently this group of gourmet birds left all that ash seed in Canada and made the trip to Bessemer just for Joe's crab apples.

Finally, thanks to all those who reported their birds to this years Christmas Bird Count, and to those who so generously feed the birds for all of us to enjoy this joyous season. Merry Christmas to all.