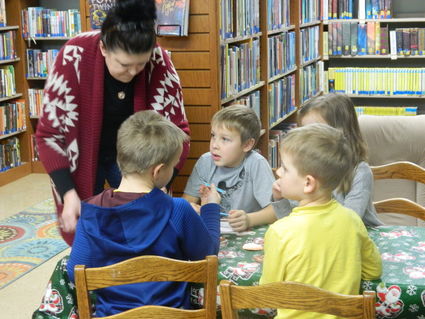 Ironwood - Nearly a dozen kids braved Monday's snow to create a snowstorm of their own as part of the Ironwood Carnegie Library's monthly arts and crafts hour.

Local artist Arlene Schneller had the young artists create copper snowflakes. She and a band of volunteers guided the children through the process of making their own copper snowflakes with a technique called "repousse."

The kids gathered around tables and used tools called styluses to leave impressions in sheets of copper foil, which they then, with an adult's help, cut out to turn into ornaments or display pieces.

The program was held despite heavy snow outside in the early afternoon.

"We will just be making a snowstorm inside," Schneller joked as she was showing the kids examples of what they could make.

Some children also created snowflakes on thicker copper sheeting, which Schneller had also brought with her.

"I hadn't expected everyone to get the hang of it so quickly," Schneller said.

At the end of the program participants got to snack on cookies served by librarian Lynne Wiercinski.