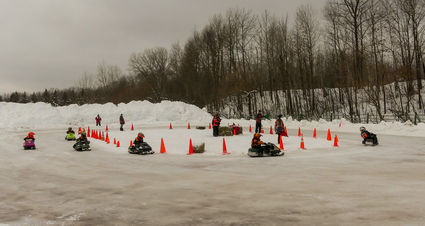 MEMBERS OF the Kitty Kat Stock race at Sunday's Ironwood Snowmobile Olympus dash around their customized mini-track as Tavyn Strand, 7, of Merrill, Wis., takes the lead and leans in to win the competition. Tavyn was cheered on by his brother, Trentyn; their parents, Nathan and Leah Strand; and their grandpa, Mark Kanitz.

IRONWOOD - The ProStar Snowmobile Olympus ended before noon on Sunday due to repeated reports of "snow dust" on the track at the Gogebic County Fairgrounds in Ironwood.

"It was snowing hard earlier, and then it stopped, but it's sure to start again," said local race director Greg Basom after the closure.

Basom said race workers cleared the track several times during the morning, but added regarding racers that "once it gets bad enough that the ones in the back can't see, it's not safe."

According to Basom, board members of the United States Snowmobil...