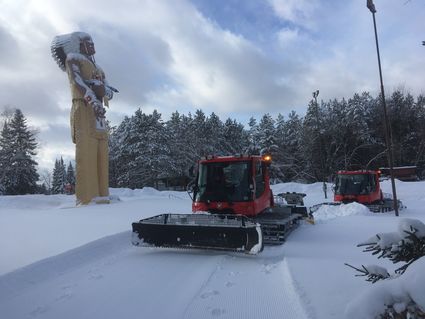 Ironwood - The 11th Sisu Ski Fest promises to be the biggest ever but it won't lose it's small-town charm, according to organizers.

There are 750 racers who pre-registered for Saturday's cross-country ski race as compared to 680 skiers last year, said Jackie Powers, Sisu race director. Spectators might find the best locations to watch at Kinnunen Road, Riverside Drive and at the "Finnish line" at Aurora and Lowell streets downtown.

"We had skiers from 14 states participating last year and the majority of those racers are coming from out of town," Powers said.

The racers start at the Active Backwoods Retreat (ABR) course at 9:30 a.m. for the 30K Sisu Classic skate; at 10 a.m. for the 30K Freestyle, and 11 a.m. for the 15K Heikki Lunta racers in both classic and free-style divisions. The first 30K racers should start crossing the "Finnish" line downtown at around 11:15 a.m.

Approximately 220 local volunteers put a face on the event that has the Sisu Ski Fest growing in numbers at a time when other races are seeing declines in participation, Powers said. That has a lot to do with the ability to host a competitive race on a challenging and scenic course, and with a small town approach that provides a unique experience that is representative of the community and local culture, she said.

"They (the racers) are staying here, visiting, dining out and creating an impression that has given Ironwood a reputation as friendly and hospitable with small town charm," Powers said.

Part of that impression comes from the charm of local architecture and having the Friday registration events at the Ironwood Memorial Building, along with the Race Expo from 4 to 10 p.m. The post-race party will also be held at the Memorial Building starting 11 a.m. Saturday with pasties and mojakka Finnish stew from Rigoni's Bakery. The awards ceremony at 1:30 p.m., she said.

The Historic Ironwood Theatre host the 6 p.m. post-race party on Saturday that is free to participants and community with live music by Copper Box.

Another decision that helped bring racers back to Sisu Ski Fest after a dip in attendance was to reduce the race from a 42K event to a 30K race four years ago, Powers said. As the first major ski race of the year it made sense that most racers prefer a shorter race, she said.

The American Birkebeiner in Hayward, Wisconsin in February, the largest cross-country ski race in North America, and the Great Bear Chase Ski Marathon in Calumet that follows in March, are both 50K and 55K events that draw racers toward the end of the season when they are more conditioned for the marathon events, she said.

The Sisu Ski Fest also has events for all level of skiers to have fun as well, Powers said.

The Depot Dash and Snowshoe Book Walk gives kids ages 10 and under a chance to put on cross-country skis and snowshoes in an atmosphere of fun and learning on Friday from 4 to 5:30 p.m. in the park next to the Historic Ironwood Depot.

There is also a Hauska Hiihto 5K Fun Ski with a 1 p.m. start time from the City Garage at 200 Penokee Road.

"It's another thing the locals might be interested in," Powers said. "It's geared for high school and college students, recreational families and seniors - the people who want to participate but not necessarily competing."

This will be the fourth year for the Fat Bike Try Out The Trails event to close the 2020 Sisu festival at 11 a.m. Sunday at Wolverine Nordic Ski Trail, at the intersection of Snow Summit Drive and Powderhorn Loop in Bessemer.

The Sisu Dirt Crew hosts the event as part of its series of annual mountain bike events. There will be a variety of fat bikes available to ride on a groomed single track.

"It's about promoting fat biking as another silent sport for the wintertime," Powers said.

Sisu Dirt Crew was part of the crew that helped make course improvements this year include taking out a challenging downhills and curves near the start where people were crashing, to avoid pileups with other skiers. The route through the landfill near French Town Road was diverted along the treeline to avoid icy winds that were freezing skiers faces.

"I think they are really going to be happy with the race course this year," Powers said.

With temperatures under freezing all week and a race day forecast of 10 degrees the existing 17-inch base snow on most of the course should be intact for the racers.

Individuals and some area businesses have volunteered to tend parts of the course this week and will continue to do so into race day.

The city of Ironwood employees and streets department helped close roads where the race course crosses. The Friends of the IronBelle Trail staff the first aid stations and other support comes from members of Easy Striders Running Club, Wolverine Ski Trails, Erwin Township Historical Society, the Rotary, the Kiwanis and others.

Sisu is one of the finals events that fall under the Jack Frost Festival calendar for the holiday season, said Michael Meyer, director of the Ironwood Area Chamber of Commerce. Sisu is a community event for locals who enjoy living in the land of snow and winter weather, but it has grown to attracts hundreds of skiers from other states who now love to return to Ironwood each year for the snow.

These skiers are also bringing family and friends to join an the crowd of area people cheering them on, he said.

"That is a big deal for a little town to have that kind of an outreach," he said. "It's not just the local folks and people are coming from great distance to experience these things."