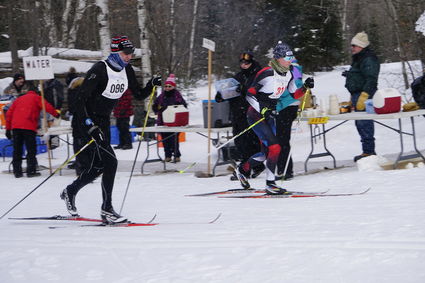 IRONWOOD - The race was just a few hours but it took a year of preparation to make the 2020 Sisu Ski Fest a success, according to organizers and the skiers who praised the friendly, smooth-running event as a favorite of the season.

"I love this town so much," said Julia Schreifels, of St. Paul, Minn., who was cheering for the skiers at the "Finnish" line downtown on Saturday. "Our husbands are skiing."

Her friend, Sue Moerer, of Minnetonka, said the snow brings them back each year.

"The Sisu is always so well organized and has a lot of enthusiasm," Moerer said. "We've been to several of them and it's always a good time."

Kay Lum, of Madison, Wis., was skiing her seventh Sisu. She was also the graphic artist who designed the artwork and logos for the Sisu clothing, awards and promotional information.

"They wanted the snowflake and something simpler so I went with it and it was fun," Lum said. "Ironwood is the land of snow."

Wetzel said he frequents the area ski trails but this was his first Sisu.

"It was gorgeous, really, really nice," Wetzel said of the course. "It was a beautiful day."

Wetzel said the volunteers were "fantastic all the way through."

"It was great to see some of the other skiers out there," he said. "It was just a lot of fun."

The best local time in the men's 30K classic was Andy Warren, No. 37, of Ironwood, who finished fifth overall. His time was first among men in the age 30-34 division.

Jordan Woods, of Mora, Minn., a member of the University of Minnesota-Duluth cross-country ski club, finished fourth this year after a third place finnish in last year's race.

"The new snow made it a little bit slow but overall it was beautiful and better than anything I skied on so far this year," Woods said.

Adam Swank, of Duluth, finished first in the 30K men's freestyle. He was just milliseconds ahead of John Bauer, of Hayward, Wis., and Nick Ross, of St. Paul.

Monahan Smith is an assistant coach of the Nordic Ski Team at Michigan Technological University. She travels with the team and has time to compete in a couple of events herself including the Sisu. She said it was a good course but the cold weather and new snow slowed the pace.

The last 10K were especially challenging because of cold and exhaustion, she said. She kept pushing because there was no way to know how close the nearest woman competitor was behind her.

"It's easy to lose a lead in the last 10K," Monahan Smith said. "I was pretty determined to win this year since I lost it by a boot length last year."

The event is well organized and the trails are fun, she said. The course has everything from long flats to hills and the twists and turns, she said.

"It's just a fun atmosphere and a fun race," she said.

Farley said this was her first Sisu after skiing sporadically for 10 years. She competed Saturday with a cold.

"I skied up in Ely when I was in high school and they have a really good coaching program there," Farley said. "We love the ABR trails but we haven't done Sisu before and just decided to give it a try."

Her companion, Kyle Anderson, said the course and the conditions were excellent. It was his first competition event since high school about 14 years ago.

"I probably placed myself in a faster wave than I should have so everybody kind of lost me right away and I was by myself," Anderson said. "It was probably better for me to be on my own so I didn't have people pushing me. I'm not quite as in shape as this one (pointing to Farley)."

Farley said the Sisu has the best grooming crew in the country. She expected the course to be excellent based on the grooming work at ABR.

The race also meant a lot to skiers who had no intention of winning. The goal was to finish.

Sandra Kivela, of Marquette, skied her first 15K at Sisu. She was welcomed at the Finnish line with hugs from friends and fellow skiers Tara Gluski and Polly Wasilewski.

"Sisu is just an important word in our family and so I just wanted to come celebrate it," said Kivela, noting her knowledge of Finnish culture is strong, but as a skier she is a self-described "weekend warrior. "Sisu was great. It's a beautiful course and everyone is friendly, and there is just great support."

Kelly Trasti and Tommy Ogle, both of Marquette, said finishing the 15K was a great accomplishment. Trasti has skied Sisu before but never completed the race.

"It's my first time finishing," she said.

Ogle was wearing oxygen tubes and said he just enjoys the experience and the people of Ironwood.

"What more do you want?" Ogle said. "You've got to do this or you'll be buried in the snow like the old abandoned car. You gotta get out and keep active."

Zona Wick, a volunteer at the Kinnunen Road Aid Station, the first stop for 30K skiers, said the ski patrollers and nurses were on standby for any type of medical assistance. The stations provide basic first aid with cots and blankets, extra hats, warmers and vaseline for frostbite.

"We want to keep the racers safe and warm," she said.

The station volunteers are certified in basic first aid and CPR, Wick said. The biggest concerns are hypothermia, frostbite, blisters and cramps.

Volunteers offered water and electrolyte fluids to help keep skiers hydrated. There were extra ski poles available if they broke one.

This year the county Emergency Management office provided radios to the aid stations to alert responders in the event of an emergency. Each station had an automatic external defibrillator in the event of cardiac event. 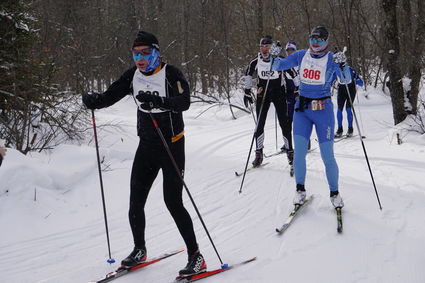 "We could handle a big event but we hope to only have to provide basic first aid," Wick said.

Sisu volunteer Ivan Hellen helped to stock the aid stations along with building a welcome snowman and igloo at the Kinnunen Road Aid Station. The skiers got to see the remains of the 1890s frontier farm as they skied by, he said.

"Every year is different," he said. "This if the fifth time the station was moved."

Hellen said the volunteers aren't just from Ironwood. People come from the entire Gogebic Range to help out including Wisconsin.

"I like that when you have a community event and everybody takes an interest in it," he said. Young and old and all walks of life."

Deb Leonard, an aid station volunteer, said she was happy to see so many skiers stick around for the dinner and awards ceremony.

"We have people from all over the Midwest who have been coming with their families year after year," Leonard said.

Find out the scores of all the competitors at superiortiming.