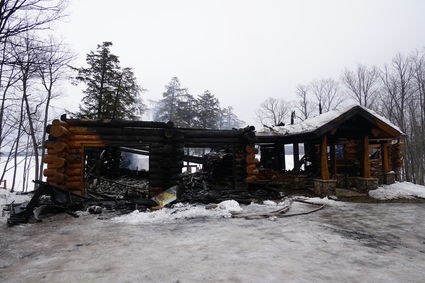 This log home on Lake Gogebic on M-64 in Marenisco was lost to a suspected chimney fire early Tuesday morning. One resident was home and unhurt after evacuating to call 911. Six fire departments fought the blaze all through Tuesday.

MARENISCO - Two Marenisco residents were unhurt when their log home on Lake Gogebic was lost to fire Tuesday morning.

Bruce Mahler, chief of the Marenisco Police Department, said the home in the 9000 block of M-64, belongs to two adult residents who were not hurt in the blaze. Six fire departments responded to fight the blaze through Tuesday evening, according to local residents.

Mahler was the first first responder to reach the home. He would not release the names of the residents as the fire is under investigation. One resident was home and...