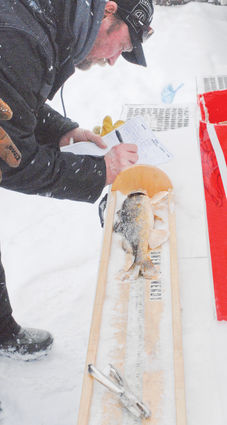 Richard Jenkins/Daily Globe Joe Smoczyk records the length of a fish Saturday at the Gile Park boat landing during the third annual Ice Fishing Jamboree on the Gile Flowage.

GILE, Wis. - Ice fishing enthusiasts from as far away as Green Bay came to the Gile Flowage Saturday for the third annual Ice Fishing Jamboree.

Organized by the Bank Club, the tournament had anglers competing to catch the largest pike, walleye, crappie and perch.

Joe Smoczyk, one of the tournament's organizers, said the 52 anglers participating was down from last year but Saturday's snowstorm probably kept some people off the ice. The weather also likely kept the fish from biting aggressively, limiting the catch.

"The diehard fisherman stayed out, snow doesn't really scare them much," he sa...