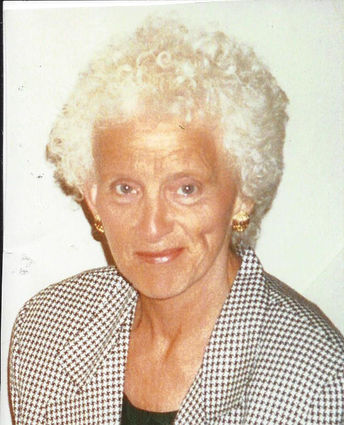 After graduating from Luther L. Wright High School, Marjorie attended Gogebic Community College. Upon completing her college education, she went to work for the Lake Superior Light and Power Company, where she remained until her marriage. In 1948, Marjorie married Peter Roman Bertini. They lived in the family home on Pabst Street, until his death in 1993.

Marjorie loved Lake Superior and loved swimming in its cold waters. She swam regularly until she was well into her 80s, and passed her love of the lake on to her children. In addition to swimming, her fitness regimen included power walking, often along U.S. 2 between Ironwood and Bessemer. Later in life, she would relish the moments when someone would recognize her and ask, "Aren't you the person who was always walking along U.S. 2?"

Another claim to fame was the recipe for her incomparable fudge frosting, which has been handed down through generations of family birthday cakes.

Marjorie volunteered at the Grand View Hospital for more than 20 years, retiring at age 80. She provided care and assistance to many people, always with kindness and a smile. For many years she enjoyed meeting her friends in the afternoons for a light meal and one of her beloved vanilla lattes. She enjoyed being among people, especially children, who recognized her as a kindred spirit. Marjorie's love for her children and grandchildren was fierce and unconditional, and she took great pride in their accomplishments.

In addition to her husband and parents, Marjorie was preceded in death by her sisters, Margaret Murley, Mary Belle Murley, Jean (Fortin) Murley and Maj. Florence Murley (U.S. Army, retired); her brothers, Bob, Bill and Earl Murley; her grandson, Michael Recla; and her aunt, Mary Belle (Aunt May) Wanzer.

At her request, Marjorie's remains have been cremated. A celebration and remembrance of her life will be held in the summer on the shores of her beloved Lake Superior.