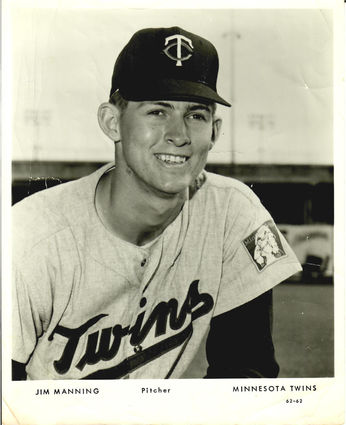 ASHEVILLE, N.C. - James "Jim" Benjamin Manning, 76, of Trout Creek, Michigan, passed away on Wednesday, Jan. 1, 2020, at Mission Hospital in Asheville, with his family by his side.

Jim grew up in Trout Creek and graduated from Trout Creek High School in 1961. He was an outstanding high school basketball player, winning All-State honors in his junior and senior years.

Jim held the U.P. record of most points scored in his four-year career with a total of 2,137 points, all without playing with a 3-point line. While in high school he was offered a full scholarship to the University of Wisconsin-Madison in basketball, but declined because his first love was always baseball.

Jim participated in the Connie Mac Baseball League in Norway, Michigan, and was scouted by the Boston Red Sox and Minnesota Twins, along with other major league teams. At 17, he was the youngest drafted and later played with the Minnesota Twins.

Jim came from great athletic genes, his father, Benny Manning, played in an inter-state baseball league and his cousin, Ronnie Manning, was signed by the Chicago White Sox.

After baseball, he worked in photography in Florida for a few years, worked at Johnson Outboard Marine in Waukegan, Illinois, and in 1984 he moved to Weaverville, North Carolina, and was self-employed, working in sales of various products until his retirement at the age of 62.

Jim was preceded in death by his parents, Benny and Violet Manning; and his sister, Karen DeCremer.

A memorial service will be held in the spring, at which time a notice will be published.