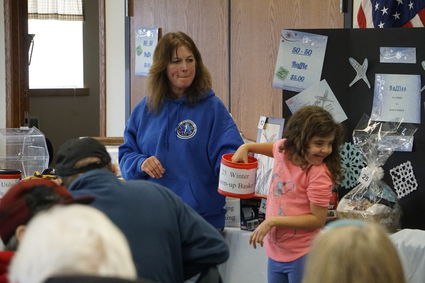 Tracy Murrin, left, an emergency medical responder with the Sherman Volunteer Fire Department, waits as Nevaeh Latoria draws a winning raffle ticket from a bucket following lunch in the Sherman Town Hall. The lunch followed the Sherman Snowshoe Shuffle on Saturday, a fundraiser for the EMR unit.

SPRINGSTEAD, Wis. - Emergency medical responders with the Sherman Volunteer Fire Department were pleased with the turnout and the show of support for their second Snowshoe Shuffle on Saturday.

"We have some very generous people in the community," said Beth Melvold, an emergency medical responder who helped to organize the event. "Once people heard what we were doing they were giving."

The idea was to create an outdoor activity and the neighbor to the Sherman Town Hall made land available for a temporary 5K snowshoe trail, she said. David McNutt came down from Mercer to groom the trail for the snowshoers for a nice surface so there were no injuries.

"We wanted exercise but nothing treacherous," Melvold said.

Even more people turned out for the dinner who didn't snowshoe, she said.

Bob Lepper, of Sherman, said he was pleased to attend an event with such strong community participation. The first responders, the fire department and private citizens all chipped in to make it a success, he said.

"That was the big thing," Lepper said. "Everybody had a good time. It couldn't have worked out better."

The EMR volunteers each brought something for the potluck lunch.

Melvold's husband, R.D. Melvold, made his chili recipe that topped nearly 30 other entries to win the Arbor Vitae Fire Department Chili Cook off just two weeks ago. The couple had gone to the event to promote the Snowshoe Shuffle and ended up winning the cook off.

The public relations work also paid off as members of the Tomahawk Fire Department made the drive to support the Snowshoe Shuffle.

After 40 years the annual Springstead Corn Roast has grown into a destination event each August to become the biggest fire department fundraiser. Some of those funds go to the EMR unit but there needed to be something more to keep up with costs, she said.

"We are getting AEDs for everybody to carry," Murrin said. "The one's we had were nearing 10 to 15 years old."

There were several gift prizes, some donated by a community or business, and sometimes by the EMR volunteers themselves. Each prize had a bucket to chose a winner from among the tickets. There were some buckets with a matching pledge from a business.

The first event brought in around $900, Murrin said. This year's event had more than $1,000 just from the snowshoe registrations and they hope to more than double that after counting up the raffle funds and the donation box at the event.

"We will be meeting next week to figure it all out," Murrin said.

There were just two emergency medical responders with the department a few years ago, she said. That number grew to 12 last year and is currently at 11 EMR volunteers currently, she said.

The responders provide a big service to cover an area between Mercer and Park Falls, Wisconsin.

Out in the rural areas where it might take an ambulance more than a half-hour or even an hour to arrive, the EMR volunteers can be the difference between life and death for medical emergencies, Melvold said. The EMR volunteers also do the things that save more valuable time such as moving furniture, calming pets and getting them out of the way, or leading the ambulance crew into an area where directions are not entirely clear.

"There is the medical end of it with the training and certification but there is also the neighborliness of it that we do," Melvold said.