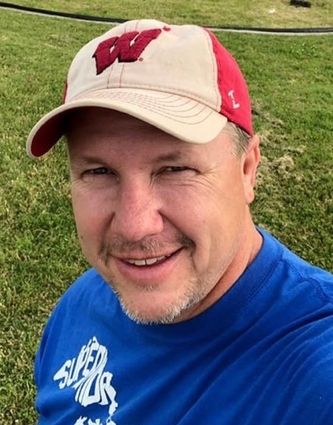 He was united in marriage to Erin Elizabeth Bare on June 24, 2000, in Superior.

Paul was a 1989 graduate of Luther L. Wright High School and continued his education at Gogebic Community College and finished his bachelor degree in education at University of Wisconsin-Superior. He taught elementary education and middle school social studies at Northwood School in Minong since 1996. At Northwood School, he also coached basketball, baseball and softball, and refereed all over the Northern Wisconsin area.

Paul appreciated music and enjoyed going to concerts, especially Rockfest. He also enjoyed golfing, fishing and baseball trips with his buddies. He took great pride in taking care of the softball field at the school. Paul loved everything Star Wars and was adamant that everyone see his favorite movie, "The Sandlot."

Most of all, Paul loved being a father, spending time with his family, planning and going on family trips, and proudly watched his daughters sporting events.

He is survived by his beloved wife, Erin of Gordon; his two daughters, Annika and Zoey Vaara of Gordon; his mother, Delores Vaara of Ironwood; his brothers, Guy (Michelle) Vaara of Hurley, and David (Renee) Vaara of Medford; his mother-in-law, Margaret Bare of Superior; his sister-in-law, Carolyn Bare of Brainerd, Minnesota; and his niece and nephew, Brooke and Brad Vaara.

Paul is preceded in death by his father, Robert Vaara; and his sister, Cathie Vaara.

A celebration of life will be held at noon on Saturday, Feb. 15, at Northwood School in Minong, where family and friends will gather from 11 a.m. until the hour of the service. Interment will be held privately.

Memorials may be directed to Northwood School for a scholarship to be created in Paul's memory.

For additional information, please contact the Solon Springs Funeral Home at 715-378-2291 or leave your condolences for the family online at bratley-nelsonchapels.com.