Tiffany, Zunker to face off for Duffy's congressional seat 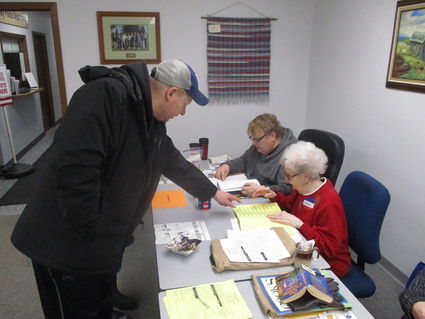 R.J. Constantini signs in to vote at the Hurley City Hall Tuesday evening. Poll workers from left are June Calvetti and Sharon Stuhr. Hurley's four precincts totaled 236 voters by 7 p.m. in the primary election. Polls were open until 8.

HURLEY - Republican Tom Tiffany and Democratic Tricia Zunker both carried Iron County on the way to their respective primary victories Tuesday night, setting up a contest in May between the two to determine who will represent Wisconsin's 7th Congressional District.

Tiffany defeated Jason Church by a total of 556 votes to 233 votes in Iron County on the way to his victory in the district's Republican primary, while Iron County Democrats went for Zunker over Lawrence Dale 405 votes to 63 votes in that contest.

With approximately 94% of the distri...