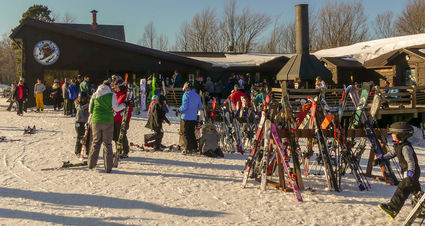 THE DECK OF Ontonagon's Porcupine Mountains Ski Area is loaded with people enjoying beautiful weather, as well as an open fire, during Saturday's Snowburst Winter Carnival. The event drew hundreds of people for a long list of indoor and outdoor activities.

Participants could not have asked for better winter weather, as temperatures soared over 50 degrees, with smiles and sun beams competing to offer added warmth.

"Woooo Hoo! - Sunshine!" a young woman yelled as she loped by a grinning friend.

Meanwhile, the deck at the Porcupine Mountains Ski Area was loaded with people chatting each other up as they basked in the warmth of an open fireplace.

Seats in the chairlift also were chock-full as a steady stream of skiers meandered down various trails. According to Bill Perrin, mountain manager, more than 500 people hit the slopes, and he estimated total attendance at about 700.

Day activities inside the lodge included live music, a vintage ski sweater competition, a silent auction, 50/50 raffles, a cake walk, and an egg hunt. The lodge's A-frame room also offered kids a bounce house and the opportunity to create a sled.

The evening also included a lantern-lit snowshoe walk, a torchlight parade by experienced skiers, and a fireworks finale that exploded from the midst of the ski hill.

Throughout the event, the lodge cafeteria served grilled food, as well as pizza, chili and cornbread.

Dads were a popular commodity, toting toddlers, managing dogs, guiding less experienced skiers, and arm-dancing on benches to the live music of Neverlund, an Ontonagon band that bills itself as "a sibling band" with members of the Lund Family.

Members of the young band, who played a lot of classic oldies, had many people singing and clapping.

Standing nearby was Theresa Lund, who said she used to play in the band, but added, "I have a family now." She was with her husband, Luke Lund, and their children, Adilee, 3, and Hayden, one.

Val Schmidt and Chris Mann of Lake Geneva, Wisconsin, stopped by for a break from snowmobiling. "I skied here when I was a child, so I just wanted to check out what they were doing," said Schmidt, who added that everyone appeared to be having "a lot of fun."

By the end of the afternoon, Linda Ralston of Sayner, Wisonsin, was among seven women getting ready to participate in the lantern-lit snowshoe hike.

Ralston and her friends also had participated in an earlier snowshoe hike, which she said took them three hours to make their way down a mountain slope.

Saturday's event was thanks to the Porkies staff, Friends of the Porkies, Gogebic Community College, and the state Department of Natural Resources.