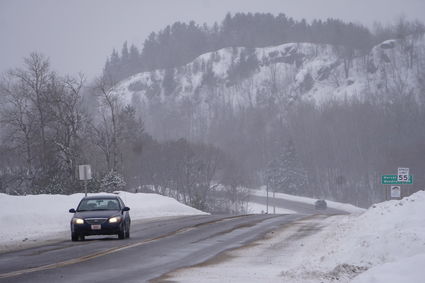 Drivers on U.S. 51 south of Hurley have their lights on during a snow shower that reduced visibility and created slippery conditions on Thursday.

IRONWOOD - Other than a potential light snow Friday morning, the weather looks to be warm and sunny for the next several days.

Ironwood could have scattered and isolated snow showers early Friday, but it should wind up around noon, said Taylor Prislovsky, meteorologist, the National Weather Service in Marquette. Most of the snow will be in the eastern Upper Peninsula at that point, he said.

"It should just be a dusting," Prislovsky said of the accumulation.

Temperatures on Friday will reach 19 degrees and dropping to around 4 degrees.