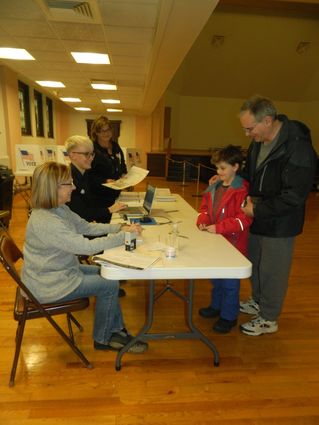 Keaton Beaudoin, 7, looks on as his father, Dean Beaudoin, signs up for a Presidential Primary Election ballot on Tuesday from Ironwood poll workers, from front, Nancy Sturgul, Ethan Puisto and Rosann Angeli. "He'd like to have voted," Dean Beaudoin said of his son. "But he's not allowed to yet... We have rules here in Michigan."

Biden had solid leads and was also being declared the winner in the Mississippi and Missouri primaries. Sanders had strong leads in the North Dakota and Washington State primaries going into the late hour...