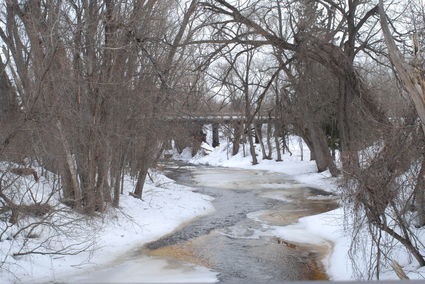 SNOW AND ice continue to melt into the Montreal River as it flows between Ironwood and Hurley Wednesday afternoon. A package of bills have been introduced in the Wisconsin legislature this week to help communities that facing the threat of flooding, including during the spring melt.

MADISON, Wis. - State Rep. Beth Meyers, D-Bayfield, and state Sen. Janet Bewley, D-Ashland, are urging the passage of a series of bills introduced this week that would help areas around the state recover from flooding and also prevent future floods.

Both legislators referenced the July 2016 flood that destroyed Saxon Harbor and washed out roads throughout northern Iron County and the surrounding region in making their case for the bills' passage.

"In 2016 and 2018, there were catastrophic floods in Northern Wisconsin," Meyers said in a statement. "Lives were lost. There was tens of millions of dollars' worth of damage to homes and businesses. I never want to see that happen to our state again."

Bewley echoed Meyers' call to action, and praised Gov. Tony Evers for his support of the proposals.

"Although others may have forgotten about the devastation from floods in Northern Wisconsin in 2016 and 2018, I am happy that the governor hasn't forgotten and is committed to taking action," she said in the same statement. "I hope my colleagues will join me in creating a $15 million pilot grant program administered by the Department of Transportation to reinforce, replace or relocate highway bridges or culverts that are at risk of failure during a flooding event.

"Our part of the state in particular is at risk for heavy rainfall and flooding every spring and summer. We all have seen roads, cars, buildings and even lives washed away by torrential rainfall. It's time to start investing in our infrastructure so that future flooding events don't continue to jeopardize our way of life in the north."

The legislation includes a series of proposals that either expand existing programs or establish new ones, the measures include:

-The creation of a $15 million annual program through the Wisconsin Department of Transportation to replace, modify or relocate bridges or culverts that are at risk of failure during a flood, with the state covering up to 50% of the total project costs.

-Allowing individuals to subtract the amount they pay in flood insurance premiums from their Wisconsin adjusted gross income.

-An increase from 50% to 75% for the amount local governments can be reimbursed for projects rebuilding transportation infrastructure to better withstand future floods after it has been destroyed in a natural disaster. The amount paid for a project would be capped at $75,000.

-Reducing the amount recipients of Wisconsin Disaster Fund money are responsible for covering down from 30% to 25% and making additional funds available through the program.

-Increased funding available through the Department of Natural Resources' Municipal Flood Control Grant program that provides municipalities with funds for a variety of flood mitigation projects.