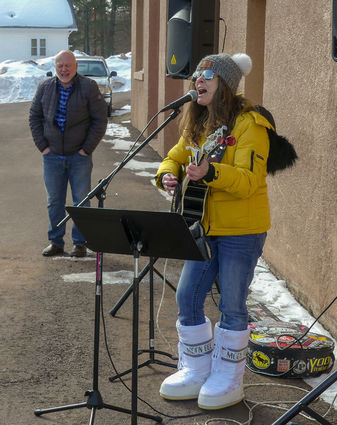 PERFORMING SUNDAY just prior to a "prayer parade" from Cornerstone Church in Ramsay is Denise Haas, also known as "Big D," as Pastor Todd Winkler, left, provides back-up spirit. After the music, members of the church lined up in cars on Main Street, next to Ramsay Memorial Park, and accepted assignments to drive to various locations throughout the Gogebic Range to pray in the midst of coronavirus warnings.

Fears of COVID-19, a strain of coronavirus that has resulted in new national and state precautions, have changed the nature of American society, resulting in a largely virtual world where human interaction occurs most safely online.

That includes churches, despite their longstanding role as places known to encourage community gathering for worship, religious learning and social support.

Although, for decades, larger small-town churches of various denominations have offered radio broadcasting of services, that convenience was aimed mainly at shut-ins, travelers, or anyone unable for whatever reason to participate in the preferred choice of sharing a pew and a smile with fellow congregants.

Now, members of churches large and small are scrambling to livestream services or to offer some other substitution for traditional congregation.

The luckiest have had a headstart, such as Cornerstone Church in Ramsay, which has been livestreaming for a couple years. Services are available via Facebook, YouTube and the church's website.

Nevertheless, Pastor Todd Winkler, who has served that church for 25 years, said he normally has 110 to 120 people at each weekend service.

The livestreaming was a bonus for people such as for one of his own family members. "My brother, who's a truck driver, livestreams us on the road," he said. "He puts it on his radio."

Winkler said social media has been "a great avenue," and noted that "a church is not a building."

Even so, he said members of his church now are seeking means by which they can continue connecting with each other and their community as tangibly as possible.

Toward that end, they arranged a "prayer parade" for this past Sunday.

"What people used to do is get in their cars on Sunday afternoon and take a drive," said Winkler, who explained that Sunday's exercise gave participants "a purpose."

Following the church's social media service, members of the congregation lined up in their cars behind the church, next to Ramsay Memorial Park.

Each car was assigned a destination to which its driver would go, so that occupants of the car then could pray for people in that locale.

"We're asking them not to get out of their car," said the pastor, whose church is nondenominational and Christian.

Pastor Nicole Hanson-Lynn, who serves as pastor of both Zion and Salem Lutheran churches in Ironwood, said Salem also already had experience with livestreaming, and Zion had been working toward it, even before the COVID-19 scare.

"We're experimenting as we go," she said. "This is an endeavor we're not going to get perfect the first time."

Despite what she described as "hiccups in technology," she said response from church members has been encouraging.

Hanson-Lynn said modern technology certainly helps to address the current health restrictions. She said her members, who total about 400 between the two churches, also are videoconferencing Bible studies.

"On the other hand," she added, "we're going back to some old practices."

As one example, she said, "We're starting up a phone tree" so that members can keep in touch - even those that might not be comfortable with computer technology.

"A lot of it comes down to love of our neighbor," she said.

In addition, the pastor said she's also suggesting in her newsletter that members create a sacred place in their homes.

"This is a very ancient practice," she said, adding that a personal altar of some sort, with a Bible, along with other items such as candles or meaningful photos, can result in "a space that helps you to feel reverent."

"I'm asking that each United Methodist Church in Michigan refrain from in-person gatherings for the remainder of March," said the Bishop. "This would include worship, Bible Studies and any other meetings."

As we face "a time like none other we've experienced," the bishop asked that members "care for one another with phone calls or other social media."

In Ontonagon, where Father Michael Jacobus serves the Holy Family Catholic Church, all services are cancelled to protect the health of church members.

"I celebrate Mass in private, just by myself," he said. "I don't livestream."

However, the priest said that his members have been encouraged to watch daily mass on EWTN, a Catholic cable TV channel.

"It's the whole county of Ontonagon," he said, adding that his members also keep in touch by phone.

"It's a day-by-day thing," said Grabow, who joked that the isolation of this region might result in being "a good thing" in relation to the virus.

He added that people should recognize that governmental leaders are trying their best to do right by everyone. "We have to give them our support," he said.

While Winkler, of Cornerstone, believes that coronavirus fears are causing many people to "hunker down and hoard," Pastor Bill Jacobson, who serves both Sharon Lutheran Church in Bessemer and All Saints Lutheran Church in Wakefield, shares an apt Bible verse from Matthew 6:34 on one of his websites: