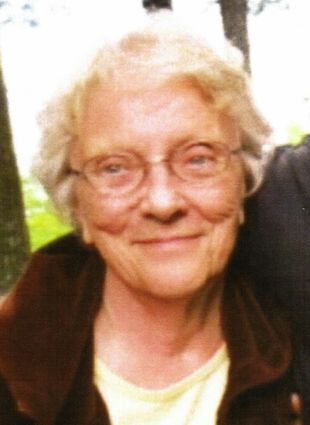 Arvella was born on Jan. 16, 1931, in Wakefield, a daughter of Arvo John and Marion Lempi (Hakenen) Torkko and was raised in Wico Location. She graduated from Wakefield High School in 1949 and attended Gogebic Community College where she met the love of her life, Robert J. Hellman. They married in 1953 and had 56 wonderful years together. They moved into their brand-new home in 1957 and raised four boys.

Arvella worked at various jobs, but her favorite was a nursing assistant at the Gogebic Medical Care Facility and Caring Home Health.

Here she found her calling, taking care of people. She was very active in her church, Christ Community Church of Seventh-day Adventists, and loved working in her gardens and camping at Crystal Lake with her family. Arvella was a Cub Scout leader and was very involved in PTA activities. She loved children and all animals, especially her precious dog, Ella, who was her constant companion.

She was preceded in death by her parents; her husband, Bob, on Jan. 15, 2009; her sister-in-law, Janet Shoholm; her brother-in-law, Ron Tourville; a cousin, Arthur "Bud" Sopko, along with numerous other cousins.

One of Arvella's favorite verses was 1 Thessalonians 4:16, 17, "For the Lord himself will descend from heaven with a shout, with the voice of the archangel, and with the sound of the trumpet of God. And the dead in Christ will rise first. Then we who are alive, will be caught up together with them in the clouds to meet the Lord in the air, and so we will always be with the Lord."

The Hellman family would like to thank the staff at Gogebic Medical Care Facility for their superb care during the last five years.

A memorial service will be held in the summer.