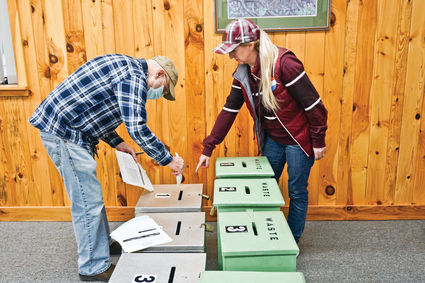 Gene Jaster, left, drops his ink ballot into the ballot box on Tuesday at Hurley City Hall, assisted by Mary Trcka, poll worker. Jaster is wearing a mask for additional protection during the coronavirus pandemic.

Hurley - Neither rain nor last-minute politics kept Iron County voters from the polls on Tuesday.

"I kind of expected I would be voting today," said Jack Brown, of Hurley. "I didn't think that the executive order was going to pass (judicial review)."

Brown said he didn't vote by absentee ballot because he doesn't mind going to the polls on Election Day.

"I wanted to come here and do it myself," he said.

Gene Jaster, of Hurley, said he knew about the order and the attempt of the Republican Party to reverse the order through the court. He watched the news and when they said the election was on he decided he had better do his part and vote.

"This was perfect," Jaster said. "I would rather have seen it like this to get it over with, but I didn't know it was going to be raining."

There were two reasons to come to city hall on Tuesday, Jasper said. He was compelled to help make a change in the nation's highest office and it was also an errand to pick up his municipal garbage bags.

The presidential preference was one ballot item. The Hurley ballot also had city council and mayor contests, along with county board, school board and a statewide referendum question.

Stacey Wiercinski, Hurley city clerk and treasurer, said that 52% of Hurley voters had already completed absentee ballots because of the coronavirus pandemic. The attempted election postponement on Monday does not change the previous court order that ballots not be counted until April 13 at 4 p.m.

"As soon as we complete the count we can release it," she said.

The voting on Tuesday was steady and there did not appear to be any confusion over the activity on Monday, said Kathy Osterman, a city of Hurley administrative assistant.

As people entered city hall, a poll worker directed them to hand sanitizer and gave directions to keep people separated by at least 6 feet in the hallway. Just one or two voters were allowed in the city council chamber at a time where the two voting stations were set up and three poll workers handled registration and voting assistance.

"It worked out for us," Osterman said.

Mary Trcka, a second year poll worker, said she filled in after hearing that some regular poll workers decided to play it safe this year with the spread of COVID-19. Then the news from Monday had everyone watching the news until late night.

"First they canceled it and then they rescheduled it," she said. "I saw it on the late news and that's how we found out that we were going to be here today."

Normally the registration workers are all seated at one table. This year ward election workers Joyce Mullard and Joy Karasti, along with registration poll worker Betsy Traczyk, were at separate tables with tape and ribbons separating them by a safe distance.

John Sendra, chair of the Mercer Town Board of Supervisors, said the town clerk, Debbie Hohner, texted him at 4:50 p.m. Monday, with the news that the state Supreme Court had denied the governor's attempt to postpone the election.

"We went through that back-and-forth yesterday about Evers wanting to push the vote back to June," Sendra said. "The statement from the GOP was that they felt the governor over-reached and didn't have the authority to do what he wanted to do."

Mercer had around 575 absentee ballots as of Monday, he said. That is around 47% of the town's approximately 1,200 eligible voters, he said.

The town generally has a voter turnout of about a 55% to 70%, he said. A steady election day turnout should reach the high end of that spectrum, he said.

Sendra's town seat was not up for election but he is on the ballot for reelection to the Iron County Board.

Susan Lesky, the clerk and treasurer for the city of Montreal, said she couldn't be precise with the absentee ballot count, but as of Monday evening it was at approximately 220 voters. The Election Day turnout was also strong, she said.