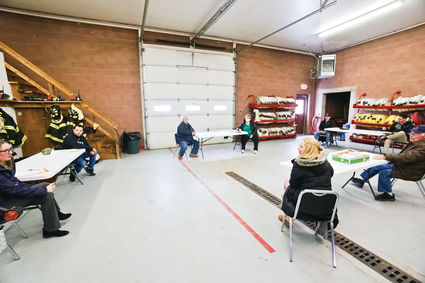 In order to practice social distancing during the COVID-19 pandemic the Hurley City Council held its Tuesday meeting in the fire department truck bay.

Hurley - The Hurley City Council on Tuesday unanimously approved a resolution to ratify an earlier COVID-19 emergency proclamation that was issued by Mayor Paul Mullard.

The resolution acknowledges the COVID-19 pandemic has impacted, or is anticipated to impact the city. The emergency conditions create a situation where the governing body is unable to "meet with promptness," after which Mullard declared that a state of emergency existed from March 20 until the council could meet to consider the resolution.

The council resolution on Thursday ratified the Mullard proclamation and extended the mayor's emergency powers granted by the proclamation through April 21.

A letter from city attorney Raymond O'Dea, recommended that all city employees be considered as essential workers and therefore excluded from the first coronavirus relief act known as the extended Family Medical Leave Act. The city should consider personnel in law enforcement, public works, and anyone necessary to carry out city operations as first responders and exclude other employees from essential worker status on a case-by-case basis, the letter said.

In his report to the council, Hurley Police Chief Chris Colassaco referred to the O'Dea letter, saying that he would present a resolution to the council at its next meeting to consider.

Colassaco said he is scheduling officers on 12-hour rotating shifts in order to work fewer days each week which will reduce overall exposure to the public. Front line workers come in contact with more people each day and officers can expect to be among the first who are exposed to the coronavirus, he said.

That requires preparing to continue services while staff are out sick for an extended period, he said. The police union views the plan as a temporary need without substantive changes to the contract, he said.

"We started by scrounging up needed cleaning supplies to keep the cars clean and then keeping the office running and finding gear to protect the officers," Colassaco said.

Working in conjunction with the Iron County Sheriff's Office, the Iron County Health Department, Iron County Emergency Management, and partnering agencies in Michigan, the officers were able to secure masks and gowns to wear should they need to go into certain situations where they are at immediate risk of exposure to coronavirus, he said.

"Everybody in this city has been working, obviously, very hard to get us through this tough time," Colassaco said. "It's going to continue. It's not going to be easy but we'll find ways to make it through the next couple of months and I don't foresee it going anywhere anytime sooner than that."

The department is responding to Gov. Tony Evers' orders as they come in and the challenge to respond immediately with all the required changes, he said. The vast majority of the community is complying and doing what they are supposed to do, he said.

"I know that this is difficult and everybody is struggling," Colassaco said. "I suspect it's going to get worse before it gets better but everybody just needs to hang on."

Compliance becomes a bigger challenge the longer people are required to stay in place, he said. As the weather improves that will make it even more difficult, he said.

"As miserable and tough as this is, it's working," Colassaco said, referring to the relatively low COVID-19 cases as compared to surrounding counties.

In the public comment portion of the meeting Mullard thanked the city council and city staff for their support during his time as mayor. Mullard did not seek reelection for the April 7 spring election and it was announced Monday that council member Jay Aijala had won the mayoral contest.

In other business, the council approved a bartender's license to Andrea Marie Graves.

In order to practice social distancing during the COVID-19 pandemic the Hurley City Council held its Tuesday meeting in the fire department truck bay.