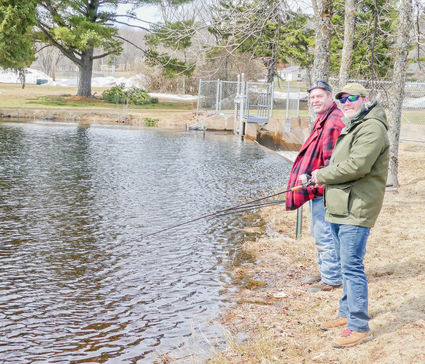 P.J. Glisson/Daily Globe GREAT WEATHER last Saturday allows the Kelch brothers the opportunity to fish at Sunday Lake in Wakefield. From left, Kenny Kelch of Bessemer and Kaine Kelch of Wausau, Wis., take advantage of free-flowing water at the northeastern corner of the lake. At the time, most of the lake was still covered with snow and ice, but water was running fast over the dam behind the men.

WAKEFIELD - Fishing is one of those curious pastimes that - funny enough - does not require a lot of success to enjoy.

Kenny Kelch of Bessemer illustrated that while fishing at Sunday Lake last Saturday.

While angling at the shoreline, where water was running freely over the Eddy Park dam, Kelch was full of enthusiasm about how he'd caught nothing of value.

His brother, Kaine Kelch, of Wausau, Wis., was in just as good a mood.

It was a beautiful day, full of sunshine, drawing happy hikers along the trail surrounding the lake, which then still had a broad layer of snow and ice reaching out from its center.

Kenny said he and his brother had been hoping for "perch, bluegills, suckers - anything!" but had come up short two days in a row.

That morning, and on the previous day, he said they'd also tried their luck at Black River Harbor "and didn't get anything."

Still, it didn't faze them as they slung their poles upon their shoulders, preparing to call it a day.

As Kaine put it, while they both grinned, he sees the pastime not as one he equates with himself, but as one he shares whenever he visits his brother.

How cool is that?

Although fishing conjures images of solitary souls sitting in a boat or standing in a stream, slinging a pole as though it will draw sanity, if nothing else, this not-always-fully-silent sport also suggests the camaraderie of man and wife, father and child, or groups of friends working as a team to bargain with the big outdoors.

Beyond that, the end of winter also brings the excitement of a change in seasons and new opportunity.

"We just did a survey there," said fisheries biologist George Madison of Sunday Lake. "There's a lot of shoreline there."

Madison is based in the Baraga office of the state Department of Natural Resources Fisheries Division and spoke with the Globe on Thursday by phone.

He said Sunday Lake, in itself, offers the possibility of catching walleye, as well as panfish such as bass, bluegill and pumpkinseed sunfish. The latter two are chubby varieties that are sometimes streaked with colors such as turquoise, coral or gold.

Because the spring thaw is not yet complete, Madison said predictions are not yet clear. In relation to Lake Superior basins, however, he added, "We're seeing some pretty good runs of steelhead."

Beyond that, he noted that it's verging on smelting season and said the brook trout season will open on April 25.

As of April 1, a new fishing license is required.

"We're seeing an upsurge of people purchasing licenses and ORV stickers online," said Madison of the DNR website, although he added that convenience stores also may have licenses for sale.

While awaiting receipt of the actual license, he advised taking a photo of the receipt. "The officers are going to be pretty understanding," he said, as long as people can display the receipts on their smartphones.

The DNR also will provide digital copies of licenses.

Above all, Madison urges playing safe. He suggested wearing hats and sunscreen for protection. "The sun beats off that water at such an intensity," he said, adding that some people are surprised by how quickly they burn.

He also cautioned, "If you're out with children, even if you're near the shore, make sure they're wearing a life vest." He said "sad stories" result every year in relation to tragedies from water-based accidents.

Madison said the DNR site has a list of waters that are classified as family-friendly sites, as well as trout trails advice that he claimed is "pretty handy."