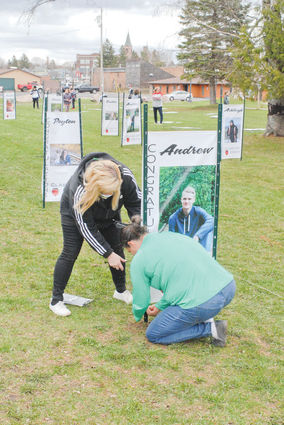 SANDRA KEEFER, left, and Judy Balchik attach a banner to a post Thursday in Ironwood's Depot Park as part of an effort to recognize Ironwood's graduating seniors.

Ironwood - With the school year's abrupt end due to the coronavirus pandemic, many of the area's seniors have been denied the traditions and experiences that usually accompany graduating high school.

In Ironwood, a group of parents and volunteers organized an effort to recognize and reward the district's Class of 2020.

The efforts include banners with the first name and picture of each of the 47 Ironwood School graduates. The banners were set up in Depot Park Thursday.

That effort began as a Facebook group before quickly gaining widespread support. Organizers raised the money to pay for the banners in a matter of hours - with donations pouring in from around the country as those with connections to Ironwood contributed to the effort.

Enough money was raised to also provide each senior with a few small gifts and organizers are planning a going away picnic later in the summer when social distancing restrictions can be lifted.

"We want all the money to go back to the seniors in some way," said Michelle Trier, one of the volunteers behind the effort.

The district is also planning a parade through town for the seniors at 3 p.m. Thursday.

"That would have been their last day of school, so we thought that was an appropriate day and time to do it, they would have been leaving school that day. They're not going to get to do their walk through the halls ... this was kind of an alternative I guess," Ironwood K-12 Principal Melissa Nigh said, referring to the district tradition of having the members of the graduating class walk through the school in their caps and gowns while the other grades applaud them.

The students will decorate their vehicles before assembling in the school parking lot for the start of the parade, which will start down Curry Street. The route will go from Curry Street to Ayer Street, before the cars turn left on Lowell Street towards Aurora Street. From there, participants will follow Aurora Street to Marquette Street, before turning onto McLeod Avenue and taking Lake Street back to Ayer Street and returning to the school.

Nigh encouraged the community to come out and watch the parade as a way to support the seniors.

"We're hoping community members and families will social distance but (also) be outside and wave and congratulate our seniors as they drive through the route," Nigh said.

Also on Thursday, the district is holding several events for students in seventh through 12th grades to pick up the items left in their lockers due to the abrupt end of classes.

Grades seven through nine can get their personal belongings from 12:30-2 p.m. Thursday, according to Nigh. Similar to the event for the lower grades, families can approach the school's Pabst Street entrance, where there will be tables set up for each grade.

Sophomores through seniors can get their things from 4-5:30 p.m., according to Nigh, and anyone who misses one of these two earlier events can get their items from 5:30-6:30 p.m.

Anyone unable to make the times Thursday will be able to get their items after July 1, according to a post on the district's Facebook page, due to Gov. Gretchen Whitmer's orders designed to combat the pandemic.

Information on the events can be found on the district's Facebook page. Anyone with questions can contact Nigh at [email protected]