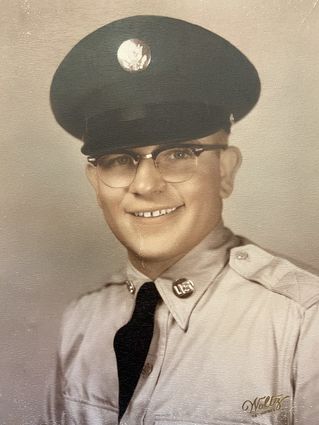 EL PASO, Texas - Master Sgt. (retired) David Lee Stone departed this life on May 10, 2020, at age 77 from the complications of Alzheimer's disease.

He was born on April 18, 1943, in Ironwood, Michigan, to Mona and Carl Stone. He was preceded in death by his parents; sisters, Geri (Tom) Klein and Pat (Bob) Hein; and his beloved aunt and uncle, Harry and Joyce Stone.

He is survived by his wife of 58 years, Sandy (Lewinski) Stone; sons David (Robin), Chris (Hyen Mi), and Charles (Rebecca); and grandchildren Katherine, Jessica, Connor, Erin, Trinity and Sye Stone. His sons and grandchildren were the joys of his life. He is also survived by his sister, Carol (Bob) Flath; brother-in-law, Pete (Sylvia) Lewinski; and many nieces and nephews.

He graduated from Luther L. Wright High School in 1961 and entered U.S. Army basic training the following week in Leonard Wood, Missouri. He spent his military career in the Army Air Defense and was stationed in New Jersey, Pittsburgh, Germany and Korea, but he always returned to Fort Bliss, where he retired in 1981. He subsequently worked for GTE, Litton and Sun Travel.

His love of travel was evidenced by his many trips throughout the United States and the world. After his second retirement, he worked daily in the READ volunteer program at Roosevelt and AOY Elementary School and made many appearances as Santa and the Easter Bunny.

A favorite hobby of his was acting. He performed in dozens of plays with his sons at the Moulin Rouge, Fort Bliss, and at the El Paso Playhouse. He also enjoyed attending the many activities of his children and grandchildren in academics, fine arts, and sports. He was an avid Green Bay Packers fan and attended many games and collected memorabilia. His humor and spirit will be missed by all, especially during holidays and football season.

Thank you to all of our family and friends who have supported us through this nine-year journey. Your kindness and thoughtfulness will be long-remembered. Special thanks to the VA and Dr. Chalupa, and to Urgent Care Hospice, Lara, Marlon, and Dr. Moya, who devoted so many loving hours to his care.

Funeral arrangements will be conducted by the Sunset Funeral Home, Northeast El Paso.

Online guestbook and video will be available on sunsetfuneralhomes.net Northeast El Paso location, on Monday, May 18.