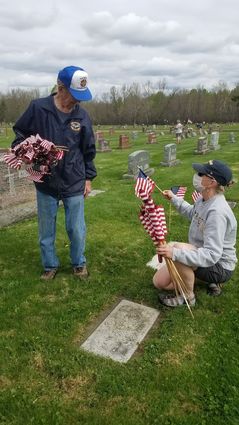 Charity Smith/Daily Globe World War II veteran Walt Maki and Susanne Brown place flags on the graves of those who served in the military, on Friday morning at Hillcrest Cemetery in Bessemer. Maki knew many of the descendants and spoke about them as Brown inserted the flags.

BESSEMER - Approximately 20 to 30 people, many of them veterans, helped place American flags on veterans' graves at Hillcrest Cemetery in Bessemer, early Friday morning.

"It's an honor to be able to do this for them. I'm 92 and still walking,"said Walt Maki, who served in the U.S. Army during World War II in Tokyo. "It's in memory for all those that served."

The annual event is a collaborative effort between the American Legion and the VFW in Bessemer, and was organized by VFW commander Donna Frello, a veteran of the U.S. Air Force, "To pay respects to deceased veterans," she said.

"I just send out a message on social media and within hours we have enough people that come out and support the program," said Frello.

The flags were provided by the city, and Dan Matonich who is the city's cemetery sexton, gave participants direction on where to go, making sure there was coverage across the grounds.

According to Frello it took an hour to place all the flags. Fourteen people were signed up for the event, but many of them brought a friend, she said.

Participants ranged in age from 5 to 92.

"We have a lot of military families (here)," said Paula Van Kuiken, whose son is serving in Spain.

"That's kinda why we do this. They're not here, but we are," added Doreen Raykovich, who served in the Air Force and the National Guard, and was placing flags with Van Kuiken.