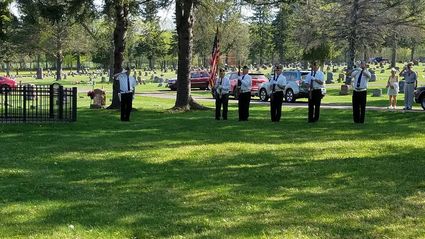 BESSEMER - The American Legion Post 27 and VFW Post 3673 held a small ceremony in Bessemer's Hillcrest Cemetery Monday morning to honor those who gave the ultimate sacrifice for the good of their country.

The ceremony consisted of short prayers offered by Gary Grabow, pastor of Living Waters Missionary Church, a rifle salute, and the playing of "Taps."

"It's a beautiful cemetery and beautiful ceremony," said Frances Backman who attends the ceremony every year with her husband, Gary, who served in the U.S. Navy. "It is just too bad it had to be cut short because of the everything with the virus, because they do a good job with the band and everything."

The A.D. Johnston High School band did not participate this year, but Marcus Re played "Taps."

"It's my responsibility to make sure that we honor the veterans and military, but to be able to do it in these times, and to be able to go Facebook Live was really important to us so that those who couldn't be here can see it," said Whitburn.

The service was broadcast on Facebook Live for the first time

"Unfortunately our circumstances didn't allow a lot of people to show up, but I do think with the Facebook Live that a lot of people at home will be able to see it," said Kathy Olson, secretary of the American Legion Auxiliary Unit 27.