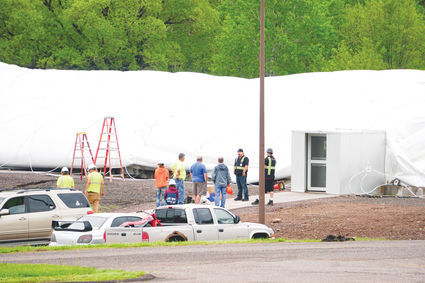 Workers start the process of disassembling the temporary dome after it was deflated Thursday morning. Once the dome is packaged and moved off site, the construction of a permanent ice skating facility will start to replace the Pat O'Donnell Civic Center that was damaged beyond repair from heavy snow in March 2019.

Ironwood - As plans for the new civic center are nearly finalized, the project visibly started Thursday with the deflation of the temporary dome that served the city for the year between permanent structures.

Wednesday was the final day for the Pat O'Donnell Civic Center Board to provide requests for enhancements or changes to the project architect and insurance company that is paying to replace the 40-year-old structure after its roof failed under heavy snow in March 2019, according to Scott Erickson, city manager. The insurance company has identified its contractor and construction materials are now being ordered, he said.

"Now the architect is finalizing the interior layout of the building in which staff and board have had input on and have made a number of adjustments," Erickson said in his report to the Ironwood City Commission on Tuesday.

The temporary dome that was installed for this past winter season came down early Thursday morning. The dome would have come down earlier but the wet weather prevented the work.

The dome was built on the site of the original civic center structure and where the permanent structure will also be constructed with a goal for completion in time for the 2020-21 winter hockey and figure skating season.

Jim Mildren, city commissioner, who also serves on the civic center board, said at the commission meeting Tuesday that Ironwood has had a skating rink for more than a century, starting with the Colonial Ice Rink followed by the Pat O'Donnell Civic Center. The willingness of the insurer and architect to work with the board and city staff is going to produce something to be excited about, he said.

"I think the public is going to eventually see a beautiful, functional, and well thought-out facility that will last for years," Mildren said. "It fits into the history of the city and it fits in with what I love to see the most, which is giving children a great place to recreate."

Mayor Annette Burchell said at the Tuesday meeting that it's important for the city to continue providing a skating facility, as it's one of a few in the region. She thanked the city residents and taxpayers who have supported the civic center.

"I certainly understand and appreciate all of the hard work that is going into planning and making sure that the civic center gets rebuilt," Burchell said. "What an opportunity to have a new facility that can take us far into the future for our community and for our youth especially."

Jim Collins, chair of the Pat O'Donnell Civic Center Board, said Tuesday that he would withhold comment on the project and the enhancement updates until all matters are finalized with the insurer, architect and contractor.

"These are things that improve the aesthetics and amenities that the Civic Center board is working on," Erickson said. "There are also interior enhancements that were added."

According to Erickson and civic center board meeting minutes, the insurance company will upgrade the exterior sign to a new reader board. The new sign will be installed on Jackson Road upon approval from Gogebic Community College.

Enhancements for the front entrance include suggestions for an outdoor flag pole area, and adding stamped and colored concrete. The city would assume costs for enhancements that are approved but do not work naturally with the design and increase costs.

Interior changes are to improve flow and function and include the entrance, commons area and concessions, Erickson said. The concessions and commons area enhancements may be funded by a private benefactor, according to meeting minutes.

The enhancements include window treatments, tables for the commons and concessions area, kitchen equipment, and a large screen television with an on-ice camera.

There is a request for a larger skate sharpening room. It will provide more space to house the original sharpener and a new sharpener. Another request is for a mezzanine with a plexiglass barrier.

Other suggestions include adding a northwest corner window to provide people inside a view of Gogebic Community College and Mt. Zion Ski Hill.

"The whole interior area is going to get rebuilt," Erickson said. "The mechanical room and the office area are staying and a temporary roof is being put over those areas for when they take the dome down."

The civic center board approved a new contract with the Ice Crystals Figure Skating Club at its May 5 meeting. The board accepted a $3,400 final payment on the club's remaining $6,400 balance, forgiving the final $3,000 due to the late start of the 2019-2020 season because of dome construction and an early end in March due to the COVID-19 shutdown.