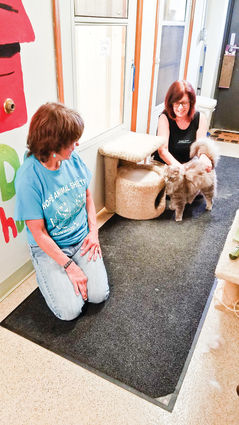 Ironwood - HOPE Animal Shelter has seen a surge in pet adoptions since the start of the coronavirus pandemic, leaving few animals in their care.

"Our numbers are the lowest they have been," said Randy Kirchhoff, director of the Help Orphaned Pets Everywhere shelter in Ironwood.

According to Kirchhoff, the shelter only has six dogs, 20 cats, and three kittens which still need "forever homes" and normally those numbers are doubled.

Shelter volunteers Leann Jahnson and Kay Fiene, who is also on the HOPE board, attribute the increase in adoptions to the pandemic and the amount of time people now have available to take care of a pet.

"They have time. They have time to bond with the animal, they have time to train the animal whether it be a dog or a cat," said Jahnson as she played with Hazel, a 14-year-old male cat, available for adoption. "Also with animals, it is relaxing, soothing, comforting - with all sorts of confusion, anxiety going on right now, not knowing what's up. This animal right here - you come home, you got worry on your mind it's not going to talk back. It's going to let you talk away and talk away and get it out of your system."

According to Fiene, many other animal shelters have also seen an increase in pet adoptions since the start of the pandemic.

"I used to work at Dane County Humane Society in Madison (Wis.) and I just recently looked on their (Facebook) page; they have like three dogs and four cats, and they usually have like 100 cats at a time and like 20 to 30 dogs."

Jahnson, who has volunteered at the shelter for 21 years said she has never seen so many pet adoptions in such a short time.

"Usually two go out and three come in, but now even those who have been at the shelter a long time, older animals and those with special needs, have found homes," Jahnson said. "It's just been really good to see."

Beverly Nasi, 81, of Hurley, has adopted several animals from HOPE and recently adopted Payton, a 9-year-old blind and diabetic female lab mix on May 19. She said people are realizing how much an animal can add to their life, calling them "great companions they are and how much company."

"A dog or a cat adds so much to your life," said Nasi. "When my son passed away, if I didn't have a dog there were some days I wouldn't even get out of bed, but ... just the idea that I had to get up and take care of that animal got me motivated to do things that maybe otherwise I would be lax in doing."

Nasi praised HOPE for its care and socialization of the animals. "When you get a pet from there you know what you are getting," she said.

Kirchhoff said another reason for the large number of recent adoptions is due to increased online exposure of the animals.

"We are trying to do our best to take advantage of social media, our website, and word of mouth. Just advertising the animals. We started video taping the dogs in the yard. So just having better exposure of the animals is helping," said Kirchhoff.