Marenisco leadership to see change of guard at year's end 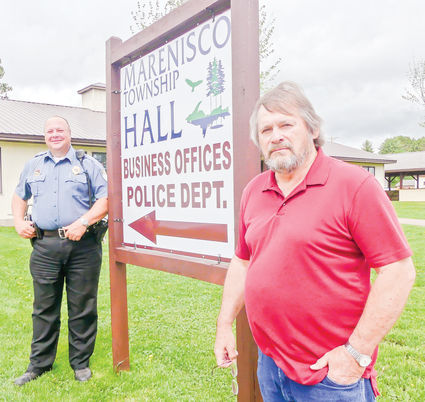 AT RIGHT, Marenisco Supervisor Richard Bouvette poses in front of the Marenisco Township Hall on Wednesday. At left is Marenisco Police Chief Bruce Mahler, who is the only candidate running to take Bouvette's position when he retires at the end of this year.

MARENISCO - After nearly a quarter century on the job, Marenisco Township Supervisor Richard Bouvette has announced he will retire after the coming November election.

Bouvette has made that decision clear in recent months, but it wasn't until this spring that only one person applied to take over the job.

He is Marenisco Police Chief Bruce Mahler, who will retire from law enforcement in August after more than 16 years on his largely one-man job.

Both men, who have a longstanding relationship beyond their current roles, spoke with the Daily Globe last...