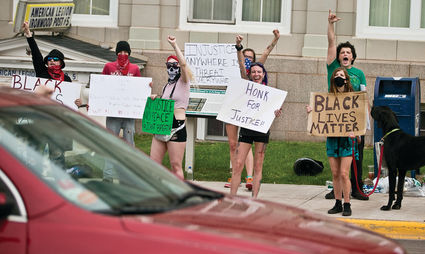 Jason Juno/Daily Globe Protesters cheer at passing cars as they stand outside the Ironwood Memorial Building Tuesday afternoon during a peaceful protest against racism and police brutality. The protestors indicated they weren't targeting the local police force, as much as taking part in the nationwide movement that has occurred in the wake of George Floyd's death in Minneapolis last week. The passing motorist shown here was one of those offering support.

IRONWOOD - Area community members who attended a Tuesday protest at the Memorial Building said they were compelled to add their voices to the worldwide outrage against racism and brutality in police departments.

After watching the social media video of George Floyd, an African-American man who died while handcuffed and laying on the ground with the knee of a white Minneapolis police officer on his neck on May 25, Heidi Amsley said she was moved to attend the Ironwood event.

"It was a really visceral moment," said Amsley, a military veteran, counselor and advocate from Ironwood.

Amsley said the video instantly reminded her of the death of Eric Garner, a black man who was choked to death by a New York City police officer in 2014. She called it a message to do something because these crimes and protests cannot go on forever.

The concern is to keep the issue about racism alive and not allow it to be co-opted into something else, she said. This is becoming a pivotal moment for the nation, she said.

"We just can't keep having these over and over," Amsley said of the protests. "I think this is definitely an American moment."

People must speak up when a corrupt police department can get away with whatever they want, said Candi Prehein, of Bessemer.

"They literally executed a guy in Minneapolis and that's not right," she said. "We need to stand up for ourselves. We need to have a voice and come together as a people and we need to stop looting and destroying innocent people's stuff and concentrate on the real enemy."

Tessa Plopper, of Bessemer, organized the protest via social media. She put the word out and people just showed up and were coming and going all day.

"It just kind of happened," said Plopper, who attended with her husband, Ryan.

Plopper said she started participating in these protest events in 2014, following the police shooting death of an unarmed 18-year-old Michael Brown Jr., in Ferguson, Missouri.

"We all believe in black-rights activism and the civil rights movement," Plopper said. "We just believe that everybody should be heard, even all the way up here in the middle of nowhere."

Black lives matter, and police brutality matters, she said. It's important that people speak up when they feel something is wrong.

"We just want to let people know that it's not OK," Plopper said.

When asked what the public reaction was to the protest, Plopper said the day started with the Ironwood Department of Public Safety driving up to ask how they could help. The officers set up a barrier so that no one could park in front of the protest, she said.

Throughout the day there were people who gave them the finger as they drove by. One driver yelled that "people like them get shot," she said.

"That was the worst of it though," Plopper said. "For the most part around 90% of the people have been waving, honking their horns and saying 'go you guys' and just being supportive."

A coffee shop owner brought iced coffee for everybody, she said.

Andrew DiGiorgio, director of Ironwood Public Safety, said he and Lt. Adam Clemens spoke with the group and were interested to know if they needed to provide any support for a march. He said the department supports the peaceful protest during this difficult time and called the group "very encouraging."

"This has had a negative impact on our country and on law enforcement," DiGiorgio said of the George Floyd killing in Minneapolis.

The police and the protestors share the same concern over inappropriate behavior exhibited by an officer, he said. The actions of one officer impacts all law enforcement and the department understands and shares the frustration and emotion that the community is feeling at this time, he said. 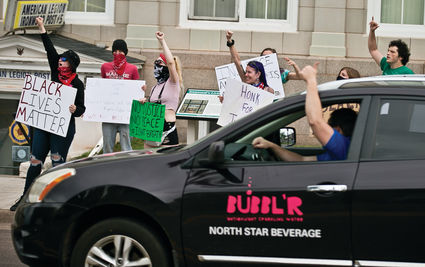 Jason Juno/Daily Globe Protesters cheer at passing cars as they stand outside the Ironwood Memorial Building Tuesday afternoon during a peaceful protest against racism and police brutality. The protestors indicated they weren't targeting the local police force, as much as taking part in the nationwide movement that has occurred in the wake of George Floyd's death in Minneapolis last week. The passing motorist shown here was one of those offering support.

"We sympathize with the (Floyd) family and we support our community in showing their concern at that type of behavior," DiGiorgio said. "We want to show that we do support that and that we should hold law enforcement to a higher standard."

The officers are constantly training and that includes cultural diversity and defensive tactics, he said. The training is so that officers act appropriately in all situations and handle themselves according to guidelines.

"We train so that stuff like that doesn't happen," DiGiorgio said. "By providing those training opportunities we can hold our officers to a higher standard. It's an ongoing learning process. You never stop learning as a police officer. We encourage training."

The goal of the department is to treat people the way they should be treated while upholding the law, he said. People in the community are not always going to have the same attitudes and opinions toward law enforcement but it's important to know that officers understand the job is about enforcing the law.

There will be two more peaceful protests organized for 1:30 to 6 p.m. Sunday and Monday in front of the Memorial Building, according to organizers. The Facebook event is titled "Protest Against Corruption - Honoring George Floyd."