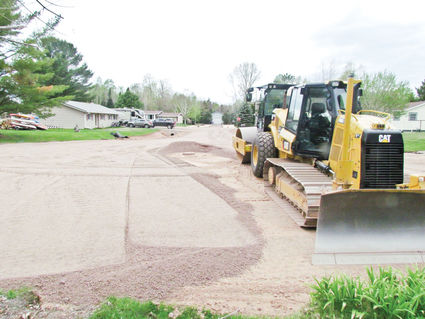 Ontonagon - With eight long days behind them, FA Construction is about 80% done with the second phase of the Pebble Beach Drive-Braceburn Court reconstruction in Ontonagon.

The project began last fall when the company reconstructed the ditches and replaced all of the culverts in the subdivision. With the drainage patterns disrupted by 40 years of building, water pooling on the streets ruined the old pavement, according to village officials and they decided to fix the drainage problems before the area was repaved.

Phase 2 began on May 11 when the FA crew began digging to remove the old pavement and the sand and gravel layer under the streets. They then rebuilt the road bed and have replaced the top soil previously removed from the ditches. After grading the gravel top layer, repaving will be the final phase of the project.

Though the residents in the neighborhood have been dodging big trucks and backhoes, some have commented that the gravel layer is still smoother than the broken pavement they have been contending with for more than a decade.