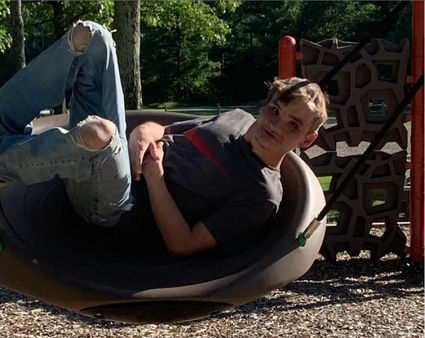 MARENISCO, Mich. - On May 30, 2020, Thomas Joseph Charles, affectionately known as TJ, was called home into his Father's loving arms following a nine-year courageous battle with his illnesses.

TJ, son of Thomas Michael "Bam Bam" and Peggy Sue Charles, was born July 7, 1994, in Ashland, Wisconsin. He attended school in both Marenisco and Wakefield, and graduated from Watersmeet High School in 2012.

TJ has taught us many things in his short life. The most important being, love of family and to never complain about small things. He taught us to be brave, to persevere and to realize - no matter how hard life gets - giving up is never an option. In a world filled with selfishness, TJ chose to be selfless. His last gift to his family was holding on long enough to allow his "three girls" to say goodbye together. He passed away cradled in his mother's arms as his sisters held his hands and rubbed his feet.

His sisters, Caitlan Niemi (Kyle Mertz) and Jennifer (Travis) Davis and I find comfort knowing he was greeted at Heaven's door by the familiar faces of his Gramma Sandi Niemi, his Papa Dick Niemi and his sisters, Brianna and Stephanie Charles.

His grandparents, Tom and Jackie Charles, and his Aunt Susan (James) Lee, and we, the remainder of his family, smile knowing he got the best bear hug of his life from his dad, Thomas Michael Charles. We also smile knowing his Gramma Betty (Earl) Charles most likely pinched his cheeks a little too hard the minute she saw him. We're pretty sure he is scavenging Heaven looking for a garbage can to pay back his cousin, Thomas Vugrinec, for the time he lifted him up and tossed him in one. In TJ's version of Heaven, he will find that garbage can.

His nephews, Lincoln, Archie and Holden want to thank their Uncle Teej for all the times he played with them - even when he felt too sick to play. His aunties, Billie (Mike) Manicki, Bobbi (Ed) Ferguson and Lori (Rick) Lanctoe, along with his very special friend, Austin Rus, and his numerous great-aunts, great-uncles and cousins join us as we say, "We love you baby boy. Fly high. Fly free."

A private service will take place at a later date in Marenisco where TJ will be laid to rest next to his father.