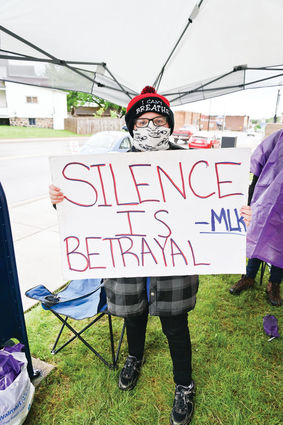 Dominic Makara, 17, of Ironwood, attends the Sunday protest at the Ironwood Memorial Building, holding a sign and wearing a cap that says "I can't breathe," to protest the death of George Floyd, an African-American man who said the words minutes before dying while laying handcuffed with the knee of a white Minneapolis police officer on his neck on May 25.

IRONWOOD - Protests continue to be held in front of the Memorial Building in support of the Black Lives Matter movement and for an end to police brutality.

Bill and Jodi Buergey said they have attended protests for more than 50 years for various issues. They came Sunday to support anti-racism and call for an end to systemic racism. They were compelled again by the state of the nation since the killing of George Floyd, an African-American man who died while handcuffed and laying on the ground with the knee of a white Minneapolis police officer on his neck on May 25.

"I think our current pres...