Wakefield-Marenisco grads get 'lift-off' at Indianhead 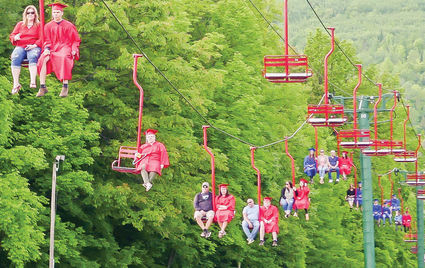 HIGH SCHOOL graduates of Wakefield-Marenisco K-12 School take a chairlift ride at Indianhead Mountain in Wakefield on Saturday evening. From left on each chair are Gage Delich and his mom, Misty Delich; Jamie Kapelka; Sara Wasielewski and her dad, David Wasielewski; Logan Hamel and his dad, Tom Hamel; Allie Goodman with her mom, Roberta White; Kaitlyn Lemerond and her mom, Monica Lemerond; and Brianna Cross and her dad, Jim Cross. Remaining students farther back, in no particular order, were Cloe Bachand, Devin Dalbec, Alexander Erickson, Dillon Makela, Morgan Miskovich, Lendro Narvaez and Michael Yuchasz. Alex Sheehan, who is in the U.S. Marines, was unable to attend.

Wakefield - Graduates of Wakefield-Marenisco K-12 School participated in a "senior lift-off" on Saturday evening when Big Snow Resort's Indianhead Mountain invited them for a chairlift ride in Wakefield.

Parents and other family members gathered at the top of the mountain, next to Summit Lodge, while graduates in caps and gowns made a dramatic ascent from the bottom of the hill while "Pomp and Circumstance" was piped in over the landscape.

Each graduate shared a chair with a family member, and was greeted with cheers and cameras as he or she descended from the lift.

More photo options were available next to graduate photo signs that were anchored to showcase the hill's scenic descent.

Graduate Kaitlyn Lemerond took advantage of the opportunity to pose with several family members, including her parents, Monica and Ryan Lemerond; brother Andrew; cousin Imajica Lemerond; and grandma Kitty Ward. They were all in force with colorful signs to commemorate the occasion.

Kaitlyn said she will attend the University of Wisconsin-Green Bay next year. Regarding her major, she added, "I'm currently undecided, but it's either going to be media communications or design arts."

When asked what inspired that direction, she said, "My love to create stuff."

Her grandmother noted that Kaitlyn was prom queen last year and Winterfest queen this year. She also served as vice president of her class and played basketball for the school.

Also taking pictures with his family was graduate Ethan Libertoski, who was helping to keep his niece, Kallie Linn, 2, in giggles.

The son of Angie and Scott Libertoski, Ethan, said he is undecided on his major, but plans to start in general studies at Gogebic Community College.

"I'm so glad they did this," said Bob Linn, Ethan's grandfather. "It's so special."

Linn said Ethan - the class salutatorian - is his second grandchild, and toddler Kallie is the last of 20. Ethan also played basketball and ran track for the school.

Following the chairlift ride and photos, a social with cake was held, and each graduate received a free ski pass for the coming season.

"We would like to thank Big Snow Resort for providing this opportunity," said Superintendent Jason Gustafson, who was present to mingle with graduates and their families.

Alex Sheehan could not attend because he already graduated in December of last year and immediately joined the U.S. Marines.

According to the superintendent, the school still plans to have a belated graduation ceremony - most likely outdoors - on July 10 at 6 p.m. Details are still in planning.