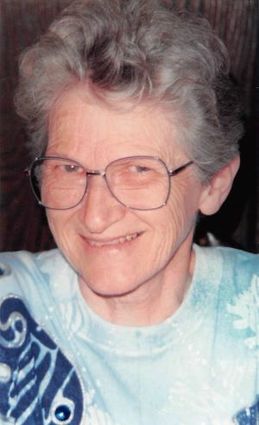 HURLEY, Wis. - Jeanne Louise Bennett, 95, of Ironwood, Michigan, passed away on June 6, 2020, at the Villa Maria Health and Rehab Center in Hurley.

Jeanne was born on Sept. 25, 1924, in Levering, Michigan, the third child of William L. and Harriett Mable (Williams) Burns. When her family moved to Ironwood, she was 3 years old. She was in the initial first-grade class at the then new K-8 Sleight School in Ironwood. She graduated from Luther L. Wright High School in 1942, and she then attended the University of Michigan, graduating in 1946.

She was a longtime member of Wesley United Methodist Church, serving on many church committees over the years. She met the love of her life, Maurice J. Bennett, at church; and they were married on March 24, 1946, at her parents' home in Ironwood. They were married for 57 years when Maurice preceded her in death on Oct. 9, 2003.

Jeanne was a hard worker all her life. She started out waiting tables while she was attending the University of Michigan. Her first job was working for her father at the Burns' Chevrolet Cadillac dealership in Ironwood. She also worked alongside her husband, Maurice, at Bennett Floors in Ironwood for many years until they retired in 1985. They raised two daughters and volunteered at many of their school activities.

Maurice and Jeanne were instrumental in starting one of the first square dance groups on the Gogebic Range in the early 1950s, with Maurice being the caller. The group met for many years every Saturday night at the Sleight School.

Theater North kept Maurice and Jeanne busy in their retirement years. From looking for an initial theater building to the construction of the current building, Maurice was busy acting on stage while Jeanne was co-directing plays and making creative theatre costumes.

Jeanne was an avid Bridge player, for many years playing in a Bridge group. She was also well known for her knitted baby sweaters, giving them away to many families. The sweaters have been worn all over the USA and overseas. She was also known for being one of the team members in the candy kitchen, known as the "Tables down at Mauri's," where some of the best homemade chocolate candies were being made in the area. She loved her family, church and community; and she met the challenge of surviving two cancer operations. She was not born a Yooper, but she was as close to one as anyone could get.

She was preceded in death by her parents, William L. and Harriet Mable Burns; husband, Maurice; brothers, Robert and Dorr Burns; and sisters, Gayle and Margaret.

Interment will take place in Riverside Cemetery in Ironwood.

We appreciate all the superb care our mother received at the Villa Maria Health and Rehab Center during the pandemic.

The family has chosen McKevitt-Patrick Funeral Home, Ironwood, to honor Jeanne's legacy of life. You can leave a condolence or a tribute at mckevittpatrickfuneralhome.com.