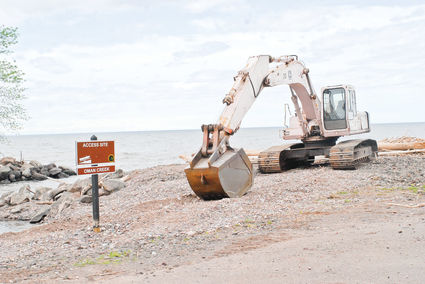 CONSTRUCTION EQUIPMENT used to dredge sediment is parked at the Oman's Creek boat launch site Thursday. The Department of Natural Resources announced this week it plans to continue to rely on dredging rather than construct a groin as the most cost-effective way of keeping the creek open.

LITTLE GIRL'S POINT - It looks like dredging will continue to be the way the mouth of Oman's Creek is kept open after the Department of Natural Resources announced it was no longer pursuing a project to construct a groin east of the creek's mouth.

"The Michigan DNR Parks and Recreation Division will continue to maintain and operate the Oman Creek boating access site," DNR Parks and Recreation Division chief Ron Olson said in a release announcing the decision Wednesday. "We have concluded that continuing annual dredging and repairing the site, if damaged by storm events, would be the most cost-effective approach at this location."

A groin is primarily designed to stop sediment movement rather than create calm water, according to information presented at a October 2019 meeting at Gogebic Community College on the project, and thus isn't necessarily built to the same height as a jetty, breakwall or other similar structure.

DNR officials said there were a number of reasons the department won't be pursuing the groin project - including the "relatively low to moderate" amount of traffic at the site, the impact of the coronavirus pandemic on the state budget, long-term maintenance and liability concerns should the groin be built, and the increased infrastructure costs elsewhere in the Great Lakes due to high lake levels.

The DNR announcement also cited improvements that have either been completed or are expected to be completed soon at Saxon Harbor and Black River Harbor as one of the factors in not pursuing the project.

The groin structure would have extended over 100 feet into Lake Superior and been as wide as 105 feet at its widest base point and narrowing to 12 feet wide at its crest.

It was intended to stop the westward movement of sediment along the coastline from filling in the creek mouth and blocking access to the boat launch there.

At the October meeting, DNR officials said the discovery of an additional six feet of loosely compacted soil within the groin's planned footprint had increased the cost of the project substantially, raising the price tag from $1.1 million to close to $2 million.

The project would have been funded by the Michigan Waterways Fund, according to the DNR, which receives revenue from marine fuel taxes and boating registration fees.

Despite not pursuing the groin construction, DNR officials said they want to continue keeping the boating launch site accessible.

"The DNR will continue to collect data at the Oman Creek boating access site for the next three to five years and spend a minimum of $40,000 each year on routine maintenance dredging," DNR Western Upper Peninsula Parks Supervisor Doug Rich said in Wednesday's announcement. "The access site will remain open and operating. The department will also work with community members and stakeholders to identify alternative ways to improve the boating access at Oman Creek."

Officials also praised the boat launch at the October meeting.

"We recognize this site as one of the most important Lake Superior boat access sites in the Western U.P. - if not the entire U.P.," said Eric Cadeau, a regional planner working on the project. Cadeau praised the easy access to the fishery and the usefulness when launching smaller crafts.

The DNR spent $210,000 on analysis, design and permitting of the groin prior to deciding not to pursue the project, according to the announcement.