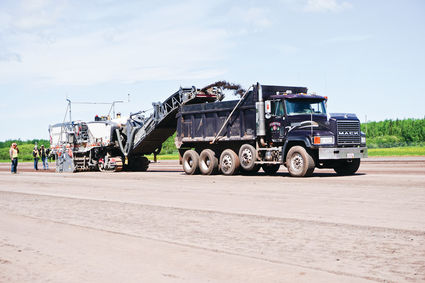 Mathy Construction Company removes layers of blacktop Thursday at Gogebic-Iron County Airport. The project to mill, level and resurface Runway 9/27 will include replacing runway lighting and narrow the runway to comply with FAA standard designs.

Ironwood Township - The runway resurfacing work at the Gogebic-Iron County Airport is on schedule as the new commercial airline released its flight schedules to Chicago and Minneapolis.

This is the biggest runway project since the last deep resurfacing in 1992, said Mike Harma, airport manager. The construction, which started in early June and will wrap up by July 15, has gone flawlessly thus far with good weather and skilled crews but the planning was a little more complicated, he said.

The Federal Aviation Administration allows for two standard runway widths of 100 feet or 150 feet, Harma said. The Ironwood airport had a non-standard runway of 122 feet and the FAA would not allow a variance to remain at the non-standard width, nor would they fund a 150 foot expansion.

"So we're back to 100 feet," Harma said. "A 150-foot width would have helped for airport expansion but the standard 100 feet will still allow for the RJ (regional jet) traffic."

The airport board wants to provide the infrastructure that would allow regional jet traffic to attract more travelers to fly out of Ironwood rather than driving all the way to Wausau, Marquette or Duluth. The 6,503 feet length of the single asphalt runway is well over the 5,000 feet required for RJ traffic and the reduction of the width to 100 feet is still adequate for jets as well, he said.

"The 100-foot runway is standard and we can still pitch the normal RJ traffic," Harma said. "We've got 50 foot taxiways which helps."

The Ironwood runway did have a 150-foot width back in the 1970s, Harma said. There was a project in the 1980s that reduced the runway width to 122 feet and it has operated as a non-standard runway ever since.

Mathy Construction Company is the general contractor for the $5,191,497 project, he said. The majority of the project funding comes from a Federal Aviation Administration discretionary grant.

The cost of the blacktop alone in the project exceeded $400,000 and so the FAA was not going to allow the airport to increase costs by removing earth to return to 150 feet, he said.

"Because it was non standard they wouldn't agree to that," Harma said. "We fought over it for a long time."

Air Choice One, the Essential Air Service provider since 2016, will conclude its contract on July 31. Boutique Air, Inc. will take over as the new EAS provider on Aug. 1 and provide service on its first contract through July 31, 2022.

Boutique has a contract or carriage agreement with United Airlines. This allows ease in making reservations, luggage transfer and gating near the United terminal to stay within the secured areas of the airport when changing flights.

Flight No. 831 from Ironwood to Chicago will run seven days a week. It will depart Ironwood at 5 a.m. and arrive in Chicago at 6:45 a.m.

Flight No. 832 from Chicago O'Hare to Ironwood will run six days a week, excluding Saturday. It will depart Chicago at 10:15 a.m. and arrive in Ironwood at 12 p.m.

Flight No. 835 from Ironwood to Chicago will run six days a week, excluding Saturday. It will depart Ironwood at 4:05 p.m. and arrive in Ironwood at 5:50 p.m.

Flight No. 833 from Ironwood to Minneapolis will run six days a week, excluding Saturday. It will depart Ironwood at 12:30 p.m. and arrive at Minneapolis at 1:40 p.m.

Flight No. 834 from Minneapolis to Ironwood will run six days a week, excluding Saturday. It will depart Minneapolis at 2:25 p.m. and arrive in Ironwood at 3:35 p.m.

In roughly two weeks, the construction crews have removed four inches of blacktop down to the concrete base of the runway. Holes were bored to house the lighting systems that will be covered with blacktop with just the angle of the light exposed at the edge of the runway.

"We've been blessed with nice weather," Harma said. "It's been a dry spring and the blacktop crew was able to go after it pretty quick."

"They picked up all the blacktop now and hauled it off and are working on the gradient now," Harma said.

The blacktop is stripped down and each layer is compacted, leveled and milled to take out small bumps. The milling truck is equipped with lasers to get the grade to within a 10th of an inch of where it needs to be, he said.

Even with the width change, the runway centerline will be the same, he said. The east-west runway direction is 270 degrees.

Wright Electric out of Marquette is preparing the lighting systems and placing the conduit that will be covered by concrete. The wiring will be pulled through after the runway is poured.

The project engineers are from the airport's consulting firm, Mead & Hunt. The design engineer came from the Lansing office and the on-site engineer is from a Wisconsin office.

The airport will close again from Aug. 13-20 to allow workers to complete the project, he said. It takes about 30 days for enough oil to seep out of the blacktop once it's been placed to be dry enough so paint will stick for lines and to cut 2 inch drainage gaps across the top.

"Cutting all that blacktop and doing the painting will take about seven days," Harma said.

The parking lot chip and seal and restriping project is running simultaneously for the convenience of an empty lot while the airport is closed. Workers will try to extend the life of the current blacktop another 10 years by applying an emulsifier with pebbles that will be sealed over to protect the blacktop.

Moving forward, Harma said the COVID-19 shutdown has put the proposed hangar project on hold. The airport is busy with nearly all hangars filled with civil aviation flyers, UPS and commercial passenger flights to Minneapolis and Chicago.