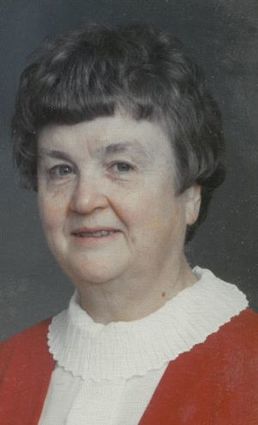 She was born in Denver, Colorado on April 28, 1927. She attended Stanford University and graduated from the University of California at Berkeley. It was in a science class at Berkeley that she was assigned a lab partner, Donald Mills, who went on to become her husband, on Sept. 9, 1949.

They began their married life in Ann Arbor while he completed his degree in optometry, and she worked as a social worker and pursued a master's degree. Wanting to raise a family in a more rural area, they moved to Bessemer with their first-born son. She had five more children who she cared for full time until the youngest was in first grade. She was always an excellent student and avid reader, so it was a great fit when she got a job she genuinely enjoyed as a proof-reader for the Ironwood Daily Globe. Her children can attest to her strict attention to grammar having experienced her correction many times. Eventually, that position was phased out and she took employment at Powderhorn Mountain cleaning chalets until she retired.

During her primary child-rearing years, she was involved with the Parent Teacher Organization and the Women's Club serving as president for one year. She was attentive to her children's education by always attending parent/teacher conferences, Christmas and spring concerts, band concerts and plays. Given that she was an only child, caring for six children and a husband was a large order. Like most mothers, the work she did was not truly appreciated at the time. She never failed to make every birthday special, preparing whatever dinner was requested followed by cake, ice cream and presents. All her friends and other family members received cards and letters throughout the year. Weekly she typed up cards and letters, saving every card and letter she received in return. As her mind began to slip, she felt so embarrassed whenever she remembered she had not gotten cards or gifts purchased or mailed out, apologizing, and promising to get it done though we knew her mind would not cooperate.

She was preceded in death by her mother Marjorie Byers, husband Dr. Donald Mills and all her closest friends.

Patricia is survived by her children, Gordon, of Eau Claire, Wisconsin, Marguerite and David of Bessemer, Douglas (Linda) of Ann Arbor, Laura of Los Angeles, California and Peter, of Ypsilanti; five grandchildren; and three great-grandchildren.

Cremation will take place and no funeral service will be held.

The family would like to extend their gratitude to the staff at the Gogebic Medical Care Facility for taking care of our mother over the past four years.

The family has chosen Frick-Zielinski Funeral Home of Bessemer to honor Patricia's legacy of life. You can leave a condolence or a tribute at rangefuneralservices.com.