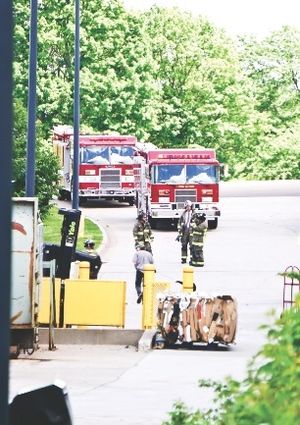 Members of the Ironwood Public Safety Department stand by behind the Ironwood Walmart on Tuesday as Xcel Energy technicians arrived to repair a gas line leak. The store was evacuated briefly for safety and the line was sealed within 30 minutes.

Ironwood - The Ironwood Walmart store was evacuated briefly on Tuesday afternoon after maintenance work resulted in a clipped natural gas line behind the store.

Ironwood Public Safety Department was dispatched at 1:10 p.m. as the contracted fire department for Walmart, according to IPSD Sgt. Matt Sterbenz. The first officers to arrive at 1:20 p.m., Andrew DiGiorgio, IPSD director, and Lt. Adam Clemens, determined that for safety reasons the store would be evacuated, he said.

"There was a contractor doing work in the area and struck one of the gas lines," Sterbenz said.

Members of the Ironwood Township Volunteer Fire Department arrived as backup at 1:25 p.m.

The officers used gas monitors to determine that no gas was leaking in the store. Store managers directed customers from the store and parking lot as the employees walked to the northeast corner of the parking lot as the wind was blowing the natural gas toward the southwest corner.

"We continued to monitor until Xcel arrived and clamped off the line," Sterbenz said.

The scene was cleared in about 30 minutes, he said. Once the Xcel Energy technicians secured the underground gas line they gave the go-ahead for the store to reopen.

There were no medical complaints and no one was exhibiting symptoms of gas exposure, he said.

Charles Crowson, a Walmart spokesperson with the corporate office in Bentonville, Arkansas, said the Xcel workers got to the damaged line quickly and got everything contained and under control. He said the leak was minor and the store reopened shortly after the accident.

"Everything is fine," Crowson said, noting that the store leadership and team are well trained and know how to move customers out of potentially dangerous situations to safety.

"It's very similar in many respects to what we learned exiting the school during a fire drill when we were younger," Crowson said. "We have a number of procedures in place to allow our associates to move customers quickly and safely."